So reading Aventurian Almanac, I came across mention of Deep Dwarves and the Wild Dwarves.any idea what they are?
Top

For deep dwarves I don't know, but for the wild dwarves, they are some sort of barbarian or primitive dwarves. They live in the north of Aventuria. They are called Brobim too.
They are issued of a secession between the dwarves during the Great War against Pyrdacor and his dragons (and lizard-men).
Top

The wild Dwarves aka Brorbim hid in the Iron Edge and surrounding northern mountains during the War against Pyrdacor and his Dragons, believing it lost. They usually dont leave their underground settlements, since they believe almost everything has been corrupted unter the Dragons' rule, especially the remaining other dwarves who must all be traitors.

(playing one emerging for the first time is a bit like playing a low-intelligence character in Fallout. You dont really understand whats around you but it must be the remnants of a big, mutating war, only knowing lichen and mushrooms, the gigantic brown, green mushrooms (aka tree) in a forest must be a sign of corrupting dragon magic)
They forgot about Angrosch and only know the Fathergod Ingra, who turned mad when the world burned and turned to ash. They believe Firnelves are the blessed Children of Ingra, protectors against the icedragons, and the only trustworthy race next to them. They are searching for Ingra's lost flame "Glost", mostly by digging straight down until they reach something fiery.
They don't worship the mad god Ingra, but their Ancestors.
Geodes (Dwarven Druids) take the role that Priests of Angrosh have in normal dwarven societies.

Deep Dwarves (Aka Pale-Ghoul's) are descendents of Aboralm's tribe, living in the "golden city" of Umrazim, in the Orklands. It was destroyed when the enslaved orks turned against their dwarven masters. Some of Aboralm's tribe fled over the surface, becoming the "red dwarves" who still live as slavers and traders in the areas around the Orkland and the north, doing anything to get more gold for their Queen Gandla, daughter of Gorscha, residing in the Mining City of Hartomadosch in the Ogre's Teeth mountains.
The Deep Dwarves on the other hand were cut off from the exits and could only flee into the deep. They lost their culture, their mind, their hair and the pigmentation of their skin. Generations of degeneration left them a weird, confused, half-animalistic state (thing Gollum).
After some Orks dug them up by accident, they spread through the north and some even to the sewers and catacombs of Gareth.
They only speak a very simple language, close enough to rogolan to be understood by dwarves, but resembling the simple orcish of ogres.
They have a vague memory of Angrosh, the god that abandoned them for their sins. And a deep longing to come home to Xorlosch, for them a fabled paradise which they can reach if they redeem themselves, they just dont know how, so they just randomly dig, hoping to find their lost identity and minds.
The Deep Dwarves, secretly settling under cities, like Gareth. Tend to steal clothing and hair from cemeteries (earning them the name Pale Ghouls) , they eat the hair, hoping to re-grow hair and beards themselves. 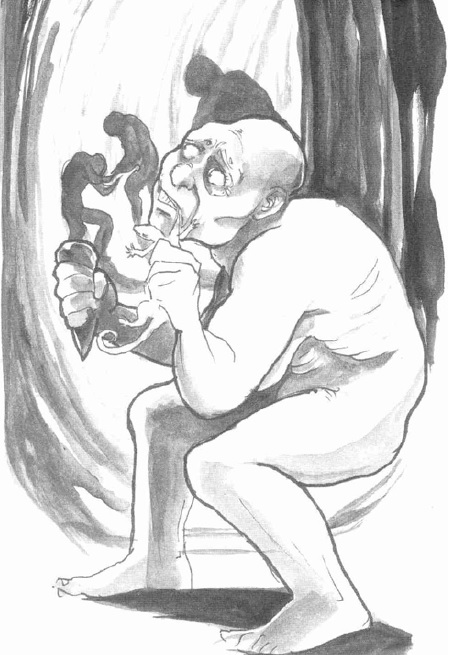 Just tell me whenever you want to know more.
I especially love to talk about dwarves, but i will help out with any topic i can.
Top
Post Reply
5 posts • Page 1 of 1