Fires of Ra Discussion and Questions

Heck, it's the Nile Empire... why shoot them in the head? Everyone knows that the brain's just a useless thing that you throw away... it doesn't even get a canopic jar!

A little mummy wrap, some time in a properly-aligned sarcophagus, he's good to go.

(or have him come back as a brai^H^H^H^H heart in a jar on top of robot body.)
Top

Don't you mean the Veiled Viper... The one who pulls the strings?

Besides, the Hooded Cobra was a second-stringer... he was a knockoff from the original Cowled Cobra. Who, of course, was in turn a knockoff from the grandaddy of them all, the Mantled Mamba. Sadly, the Mantled Mamba was undone when his younger sister, the Bonnetted Boa, who fell in love with a hero by the name of the Mighty Mongoose and joined the Mystery Men. She was later targeted by the forces of Mobious, and had to fake her own death and return as the Hijab'd Habu, an utterly impenetrable disguise.
Top

Personally I find it more fun to give into the campiness of the cosm, but you can seriously play up this disconnect (pun intended). Part of Torg is messing around with the genres and tropes. There’s already a movie that captures the conflict between cheesy pulp and gritty pragmaticism: The Last Action Hero. It doesn’t deal with that specific genre, but the atmosphere is still the same.

My PbP group is all Torg veterans, so they easily rolled with the Nile tropes. Villain got away. We’ll go chase after him.

My home game did pretty well too. One of my players is rather impetuous (when soldiers took away a “stolen” automatic rifle from the Living Land savage because of a Mistaken Identity card, his response was to pull a grenade and threaten to blow everyone up), but even he got into the Nile feeling as he described putting a gun to a downed foe’s head and struggling with pulling the trigger. Ultimately he chose not to. It was a good feeling.

I run a lot of Torg demos, and I’ve had my share of pragmatic players, but Nile has mostly been treated with the right amount of reverence. Maybe I describe it correctly? Or the other players get into it, and their enthusiasm is contagious? Not really sure.

But I think that handling it as an anomaly is the right course of action. Everyone witnessing it should be shocked by the sudden act of brutality. The Storm Knight is definitely a stranger in a strange land, and he’ll be viewed as something otherworldly, which he most certainly is. But word of his heinousness could spread. Bartenders don’t give out information since they could be contributing to someone else’s murder. The police are more likely to lock him in something more restrictive than usual. Even a death trap ironically becomes more deadly for that character as the villain knows that he doesn’t “play by the rules.” Everyone else has to make the usual skill rolls, but that character has a basket of scorpions dumped on him on top of that. Or they have shocktroopers on hand to constantly fire at him.

Torg has so many atmospheres. Not everyone is going to get into the swing of each one.
The Boneyard – Friends and foes within Tharkold's Blasted Land

You know what else is rough? Finding pictures to use for the female shocktroopers in Act Four. Sure there's lots of pictures of female egyptian warrior types, but you want ones that kind of look like schmucks you know? (or of the pic on page 57 was like a few cm wider on the right)
Last edited by Greymarch2000 on Thu Sep 12, 2019 5:02 pm, edited 1 time in total.
Top

Yeah, trying to find shocktroopers with a Germanic vibe? Super easy. Heck, I can get minis for the She-Wolves even.

And I've given up trying to find minis at this stage, let alone female versions.

Though I did really like how I managed to get Queen Aegea's throne room to look after messing around with changing the size of tokens in Roll20 to fake perspective. 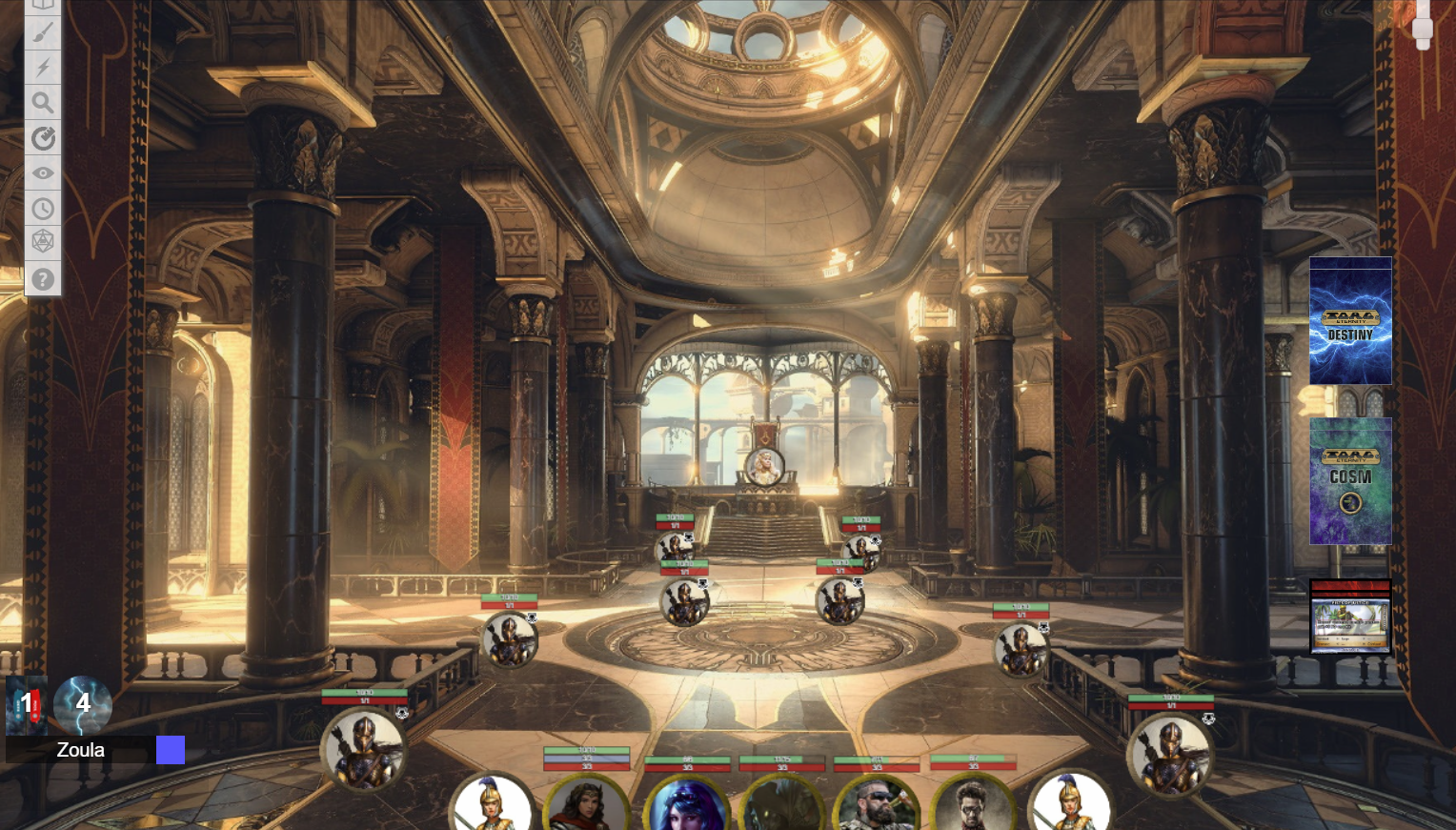 I eagerly anticipate the horrific diplomatic incident that my players are going to cause.
Top

So started into Act Four and one of the first things that happens is one of the SKs plays a Romance card on Magaera during the dinner. Oy.
Top

Greymarch2000 wrote:So started into Act Four and one of the first things that happens is one of the SKs plays a Romance card on Magaera during the dinner. Oy.

I had the star crossed romance on the Elite Nile Shocktrooper
Question everything.
Politeness costs nothing.
Top

Greymarch2000 wrote:So started into Act Four and one of the first things that happens is one of the SKs plays a Romance card on Magaera during the dinner. Oy.

I wish I could be a fly on the wall in scene 6!
Brian Reeves
http://brianreevesauthor.com
Top

By the way, the DSR ending scene 6 is one of the things I wish I'd done differently in hindsight. I think it works better as a standard series of actions, not a DSR (which works best when not tied to specific physical locations or concrete sequences).
Brian Reeves
http://brianreevesauthor.com
Top
Post Reply
172 posts

Users browsing this forum: No registered users and 5 guests