So i wrangled someone into helping me edit the Custom Char Sheet that Zor gave me and that, IMO needs to be used because its good. Also the code has been tightened up and made more uniform for future edits.

Now it has a drop down menu for Home Cosm, and whichever you choose it will populate the Axioms at the top. 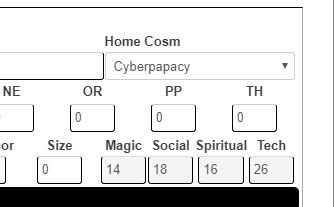 Also, the Stymied and Wounds sections now show the modifiers in the output like this: 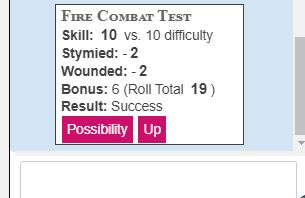 The Combat Options that Zor put in there are not yet showing up in output, but they will soon, with something similar to how Stymied and Wounds show up.
EDIT: This is wrong I just found out. The Combat Options show up when you use a Weapons Roll Button. They do not show up if you roll something from the Skill list. Yay!

I do not know how to effectively utilize the Vulnerability statuses. Like I guess have it show up in the Active Defense Roll? Or not at all?

Also, there is currently not a way to have this sheet approved and submitted for choosing in the list of sheets for Roll20 games. Its due to the way the sheet is made and would require a rewrite to fix. So for now it has to be a custom sheet so the GM needs to have Pro subscription.

I like the addition of the wounds/stymies/combat options in the chat box. I did not know how to do that, so it was in the background before.

I have to say that while i like the idea of loading cosm axioms automatically, it doesn't allow the "other" to either write a new cosm name (Such as Akasha from RoP) or GM made cosms (I have 2 players with non-standard cosms) or even allowing for the Cosm boost Reality Perk.

I added my 2, but it might be good to offer the choice to add a name and option to choose axioms for something non-standard.

Also, when doing any Combat Option, it says "aim" in the chat box (the attribute name is aim). This is easily fixed by renaming the part in yellow below to "Combat Option" but keeping everything else as "aim"

Thanks Zor I fixed it. Much better.

I cannot believe its only us two that use the sheet. Need more people to test all this out and offer suggestions.
Top
Post Reply
3 posts • Page 1 of 1

Users browsing this forum: No registered users and 15 guests