A GMs Preview of the Theater Knights Campaign (Spoilers!)

The Theater Knights campaign pits the players against evil conspiracies and puts them in the center of the fight for the Bornland’s future. Your heroes will have to use diplomacy, stealth, and knowledge to prove themselves on the field of battle and in the halls of politics to achieve their goals. But there is even more to the story. In this preview, we will tell you more about the background of the campaign and what happens in the last three books. If you do not want to be spoiled, you can skip this one and join the crowdfunding on the 21st of July.

If you choose to continue, we will reveal to you some of the secrets of the Theater Knights.

As the Green Platoon begins, the heroes may suspect there is more to the Alliance of Kor’s Sign than just an insurrection. In the Green Platoon, this suspicion will become fact. The Nameless One and his servants are using the alliance to prepare an invasion of Aventuria by the Nameless Hordes beyond the Iron Edge.

The cruel ruler of Notmarch will prove to be a surprising ally in the fight against the alliance’s army. In the siege of Notmarch, the heroes descend into the catacombs beneath the city to track down some cultist and discover the legendary Goblin Timbal. It is rumored to have the power to open a path across the Iron Edge. As an accidental drumbeat triggers a volcanic eruption that ravages the city, the heroes will have to fight for their lives.

With the Alliance’s Army routed, the danger isn’t over. As the heroes rush to secure the Timbal and gain more knowledge, traveling along the Walsach river, they have to fight against pirates and evil fae. The Walsach, an ancient and mystical border, is under siege as well. The heroes will have to venture into the realms of the fae and gain them as allies. With this alliance, they can travel deeper into the Iron Edge to find the home of the legendary dragon riders. Here they need to seal a mystical gateway to stop the invasion of the Nameless Hordes from beyond the Iron Edge. They meet Leudara again, who, by now, has pledged herself to Kor, rejecting Rondra and the Nameless One. 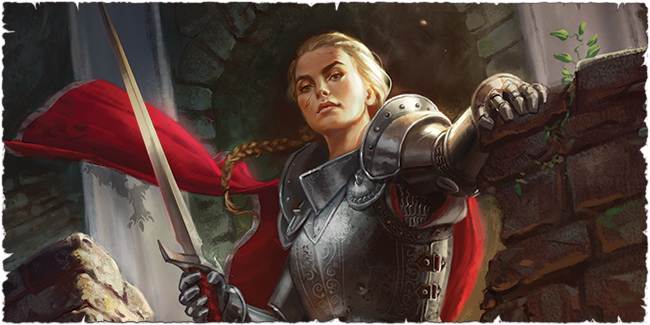 With the military power of the Nameless One broken, he and his servants resolve to trickery. Olko, who is believed to be dead after falling into the volcano of Notmarch,  has pledged himself to the evil god and is enacting his plans in the bornish capital of Festum, where the nobility gathers to elect the next leader of the land.

The heroes have to investigate and fight other aspects of the Nameless One: trickery and treachery. As they do so, the goblins of Festum have their own plans. They are ready to pass on the responsibility for guarding the border of the Iron Edge and protecting Aventuria from the influence of the Nameless One to the heirs of the Theater Knights. This ancient task that comes with ruling this land was neglected since the colonization of the Bornland centuries ago.

The heroes and some important bornish nobles will have to face the ghosts of their past and reconcile their legacy with a new task that Aventuria will depend on in the years to come.

1 thought on “A GMs Preview of the Theater Knights Campaign (Spoilers!)”