We are currently in the phase of development where many things are going on but not much of it can be shared publicly. Things like punchboard layout, trade dress revision, and adventure outlines require a lot of work, but it only makes sense to post about them when they’re finished.

However, we did recently get the completed art for several new hero cards, and I’d love to take a moment to talk about those. END_OF_DOCUMENT_TOKEN_TO_BE_REPLACED 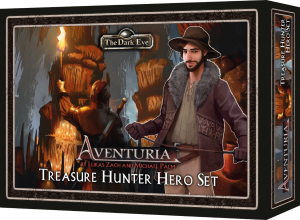 In the upcoming Aventuria – Extraordinary Heroes crowdfunding (launching next week on Game On), we are including four Hero Sets. Each one is devoted to a single hero and provides all the cards you’ll need to start playing that hero right away. Each box also includes a themed solo adventure built specifically for that hero.

END_OF_DOCUMENT_TOKEN_TO_BE_REPLACED

We are excited to announce a public demo for the upcoming Myth: Dawn of Heroes!

We want everyone to get a chance to try out some of the updated rules, and since we couldn’t do that in person at Gen Con this year as we had originally planned, we decided to make the demo available digitally.

END_OF_DOCUMENT_TOKEN_TO_BE_REPLACED

The Apprentice is the classic “glass cannon” hero. Most of what he does is unload damage, but he’s also very fragile and liable to draw attention. It wasn’t hard to keep that feeling, so instead we leaned into it with the Dawn of Heroes version. At the same time, we did find a couple of things to improve with how the Apprentice plays.
END_OF_DOCUMENT_TOKEN_TO_BE_REPLACED

In many ways, the Soldier is the core hero. She works well because she is flexible enough to be played in a variety of ways with a party, but also strong enough to play alone. She isn’t too focused on any one thing, but that also means she’s never a bad choice to have around. The Soldier does not change much in Dawn of Heroes. That makes her a perfect hero for talking about how we can further fine-tune the things that already work well in Myth.

By taking a fresh look at Myth, we can clarify many of the things that work fine but may be confusing to newer players.

END_OF_DOCUMENT_TOKEN_TO_BE_REPLACED

Unlike some of the other heroes, we never felt the Brigand was broken or hard to use. But that didn’t stop us from wanting to make the Dawn of Heroes version even better! As with all the heroes, we want this to be a fun hero for new players, but we also want to provide opportunities for experienced players to practice and optimize their strategies.

END_OF_DOCUMENT_TOKEN_TO_BE_REPLACED

Last time, I talked about the Acolyte, a hero we have been trying to make a little more challenging to play. This time, I talk about one we wanted to make a little easier. The Hunter has always taken a bit of time to set up, but once she gets there, she does a lot of damage. We wanted to keep this feeling but make it a little clearer to new players.

END_OF_DOCUMENT_TOKEN_TO_BE_REPLACED

Dawn of Heroes is still deep in playtesting, but we have been making excellent progress. Although many things may yet change, I wanted to share some of our specific thoughts about individual heroes. As I indicated in the movement article, my goal is to clarify, differentiate, and balance the elements of Myth. I do not want to change how they feel to play, except to make them feel MORE like that.
END_OF_DOCUMENT_TOKEN_TO_BE_REPLACED