(This article contains mild spoilers for one of the adventures in the Aventuria base set.)

The Adventure Mode in the Aventuria Card Game has two phases. First, there is the story, in which the text of the adventure is read and the heroes face skill challenges that can improve or worsen their overall position on the way to the final conflict. A typical adventure chapter has about 3 to 4 skill challenges during this phase. Then comes the combat, in which the heroes fight against a combination of Leaders and Henchmen. The abilities of the Leader and the specific Henchman drawn provide quite a bit of variety in the combat experience, but there is usually even more going on.

Most adventures will also arrange a set of circumstances surrounding the fight – there may be a time limit, or the heroes may not be able to attack the Leader at first – and these circumstances make the combat more challenging and give the heroes more things to think about. To help set the stage, the Adventure Card deck may include Hero Action cards for that specific fight.

So, for instance, the second chapter of the Wildenstein 3-part adventure includes a fight against Baron von Wildenstein in a crowded room of hypnotized party-goers. The Baron himself is up on a balcony, making him difficult to attack. The heroes are then provided with three different actions that they can take in addition to the normal options in their decks: 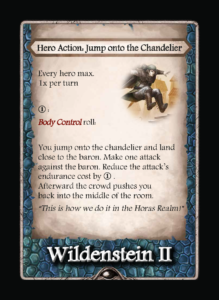 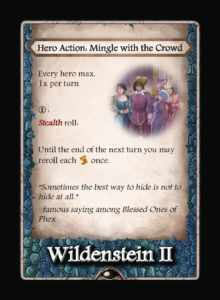 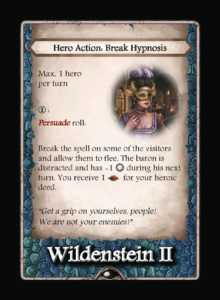 As you can see, these actions enable the use of skills even inside the  combat itself. They also give the heroes the opportunity to strategize a little bit and divide their efforts according to each character’s abilities.