In our last card preview, we looked at swarms, one of the new mechanics introduced in the first Aventuria expansion, Forest of No Return. In this preview, we’ll examine liturgical chants, the other new mechanic introduced in that expansion. Liturgical chants are a new to type of adventure card that are (so far) unique to Hilbert, Blessed One of Peraine.

Liturgical chants fill some of the same roles in Hilbert’s hero deck as spells do in Mirhiban’s – they provide additional utility and flexibility while covering some of the gaps left by the absence of expensive armor or weapons. Hilbert also rolls against his Magic attribute for any attacks or checks provided by a Liturgical Chant card. (Although the RPG uses Karma for Liturgical Chants, it made sense to keep the attributes simplified in the card game.)

However, Liturgical Chants have a distinct flavor in terms of how they work in the game. Most of them have an initial Endurance cost that is much lower than you would expect for their powerful effects, but then they must be sustained. Let’s take a look at “Martyr’s Blessing” as an example: 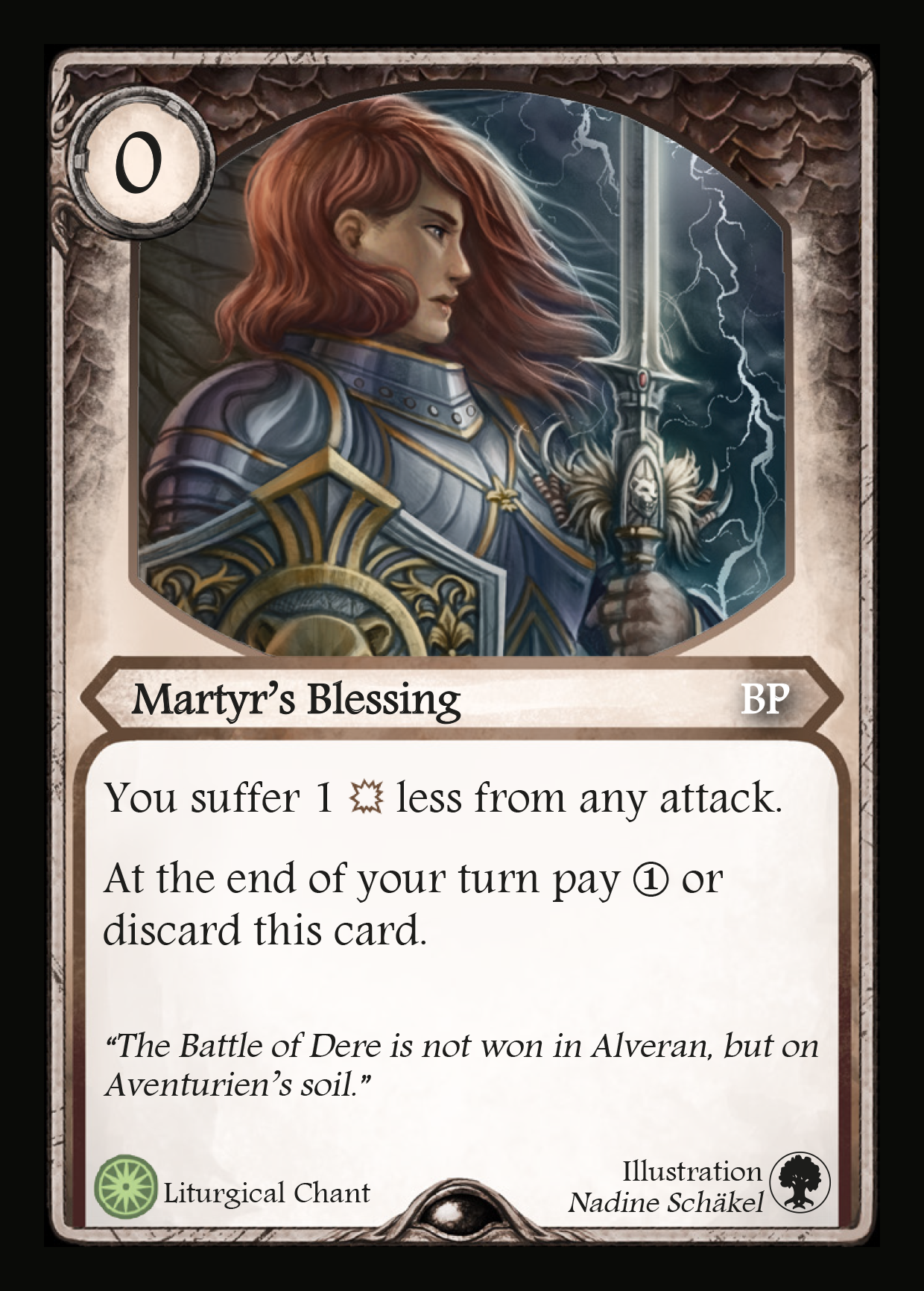 As you can see, this card is extremely inexpensive for its effect. Reducing the damage on all incoming attacks by 1 is very powerful, yet the card costs nothing to put into play. The important text is after that:

At the end of your turn pay (1) or discard this card.

Every Liturgical Chant with an ongoing effect, including some that provide more powerful attacks, have this text. Brother Hilbert pays less initially, but he might accumulate several chants that he has to maintain every turn, making it harder for him to pay for a more expensive card without losing something he already has. This ongoing maintenance makes Hilbert’s deck play very differently from the other hero decks. Nevertheless, you will be happy to have Hilbert’s powerful protection and healing on your side when you face the werewolves that inhabit the Forest of No Return…

Next time we’ll dig into the zombie pirates and their cursed treasure in Ship of Lost Souls. And be sure to keep following the Aventuria Kickstarter!