The following is a review from earlier this year of the German edition of Aventuria. We have included pictures from that review to make this translation as faithful as possible. You can find the original text here:

The Dark Eye RPG, now more than 30 years old, continues to be the most successful role playing game in the German scene, and even its 5th edition with its more simplified rule set remains one of the more complex systems in Europe. Wouldn’t it be nice if the game could be better known outside of its dedicated community of enthusiasts? The new adventure card game Aventuria, a cooperative effort between Heidelberger Spieleverlag and Ulisses Spiele, achieves just that. An extremely easy-access “Living Card Game” (not to be confused with “Trading Card Games”) can be played in a player-vs-player duel mode as well as an exciting role playing group adventure. This naturally raises the question as to whether the two different game concepts really work, and if they are indeed fun to play.

Let’s start with the duel-variant which will be the main point of interest in “Aventuria” for non-role players. In this mode, each player chooses a hero and its associated deck of 30 action cards and then competes against an opposing hero. Whoever reduces the opposing character’s life points to 0 first is the winner. Duels, which take about half an hour to conduct, set up very quickly: set the life point counter (a stylish wheel) to the starting value of 40, lay out the hero cards and fate points, shuffle the card deck, draw the first five cards, and off you go. 🙂

Players take turns conducting individual phases of the turn. First, resolve cards with effects due at “the beginning of a turn,” then draw two cards from the deck and refresh the exhausted cards (more on that below). Next comes the probably most important phase apart from the attack phase, namely the choice of endurance cards. These cards, which you place face down on the table (up to two every round, chosen either from your hand or from equipment that you no longer need), act as the currency or energy needed to use new cards. For example, it costs four endurance points to equip a hero with a short bow, so you need to “spend” four endurance cards (they can only be recharged in the next turn). An attack with the short bow costs yet another endurance point, so players must decide early on whether to get equipped first or dish out a few heavy blows. It is advisable to set aside a few endurance points for the opponent’s turn, to do things like activate armor or perform certain free actions (such as improved dodge). 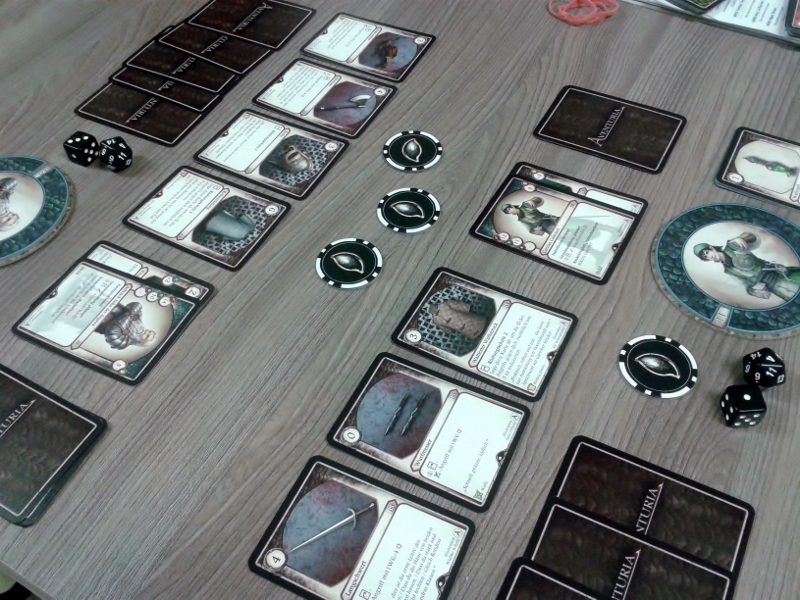 This takes us to the actions available to the player. A player with enough endurance points and the corresponding action cards in hand can equip a hero, improve stats, or make an attack. Some heroes can attack up to three times. The game has three options: melee, ranged attacks, and magical attacks for mages. Players roll a d20 to resolve attacks (it wouldn’t be The Dark Eye without a d20, after all 😉 against the corresponding attack attribute. If the die roll is less than or equal to the attack value, the attack succeeds. If this fails, the attacking player at least gains a fate point (which lets you repeat an attack, draw another action card from the stack, or gain an endurance point). The opponent may then attempt to dodge with a d20 roll; success halves the damage. Armor also lowers the damage received (the base amount depends on the weapon used). The previously mentioned short bow deals 1d6+4 base damage. All damage suffered is then subtracted from the life point wheel until it finally hits 0 and the player’s hero is eliminated from the game. Besides the familiar d20, players of The Dark Eye should also recognize critical successes (die roll of 1) and botches (die roll of 20). A critical success lets you draw another action card from the stack while a botch lets the opponent choose a card from your hand and discard it. That one is really nasty… 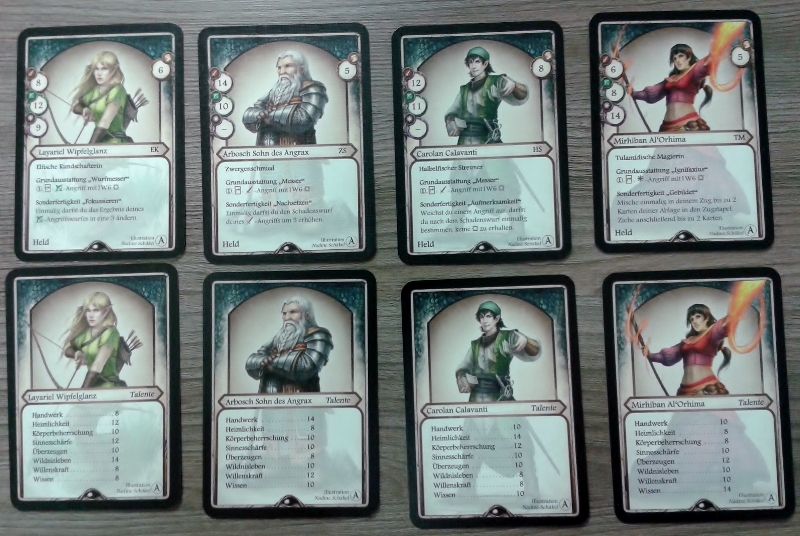 A small summary of what we’ve seen so far: The duel mode works well in terms of game mechanics and the core set – with four characters and decks to choose from – is a lot of fun. The expansions will allow for more customizable deck building and will give “Aventuria” a hefty boost in the card gaming community. 😀 I really hope that the publisher considers establishing Organized Play and tournaments. Maybe they could have a sort of “Friday Night Aventuria” as made popular by the big competitor (or rather, role model), “Magic: The Gathering.” Especially since the publishers clearly intend to steer non-role-playing card players slowly and carefully to the “Dark Eye” RPG with the use of the Adventure Mode. This brings us to the second game mode offered by Aventuria, which, according to my personal observation, was received with even more enthusiasm than the Duel Mode by the players!

Here players do not compete against each other. Instead they cooperate to experience small adventures. Setup is similar to the Duel Mode, but with the addition of individual skill cards for the heroes. These show the heroes’ skill values (Crafts, Stealth, Body Control, Perception, Fast-talk, Survival, Willpower & Knowledge). Basically an adventure, which often has multiple acts, consists of a text that is read aloud and either leads to a skill check on a d20 (with advantages / disadvantages, depending on the situation) or to combat. The heroes fight together against an enemy that changes based on the difficulty level of the adventure. Each enemy has a danger value (when playing an adventure multiple times, one might encounter many weak enemies or a few strong enemies) and special abilities. Furthermore, each enemy has an action table they use when it is their turn. The result on the d20 roll on this table shows if an enemy heals wounds, attacks a hero, does something to add color to the game (such as yelling something in orcish), or even attempts to flee. And what is it all for? Of course, to experience exciting adventures 😛 but also to loot treasure cards which boost character values. Looting & leveling up – just like in a “real” roleplaying game 😀

If the group wants to fight some more, the game has rules for random encounters. This brings us to the topic of chance and maybe the only small point of contention about the game system, at least from the point of view of card game power gamers: When rolling for damage, one can sometimes get really unlucky and cause less damage with a well-equipped hero than a weakling may cause with a lucky roll. And one’s armor can quite easily be smashed in the higher difficulty levels if one draws a bad starting hand in Adventure Mode. But on the other hand, this is just like in a role playing game and can be seen as a sort of authentic implementation of balancing 😉 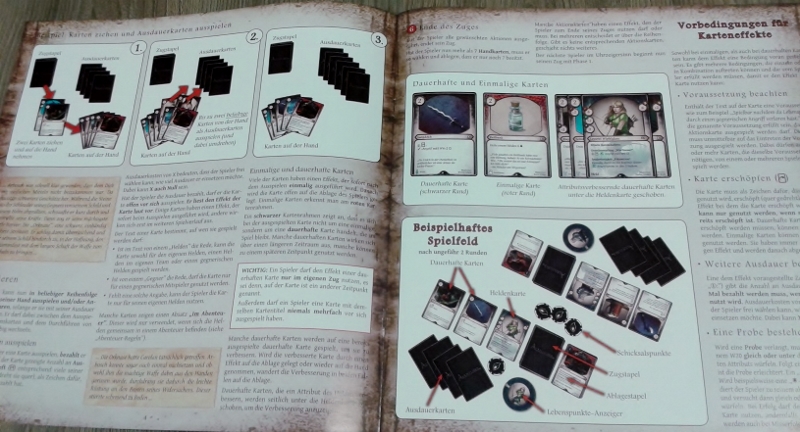 Unfortunately the “Aventuria” core set only offers two scenarios: one short and one long, though both are based on actual RPG adventure modules (long before my time ;-). These are consistently entertaining and have replay value thanks to the four difficulty levels. I am very curious what the first expansion will offer, but I personally would like to see something like a choose-your-own-adventure book with multiple paths to the goal. After this great core set, I am confident that Heidelberger Spieleverlag (who provided me with this review copy) will not disappoint. 🙂 The slightly oversized but worthy core set contains 4 hero cards, 126 adventure cards, and 120 action cards, 4 hero markers, 4 life point wheels, 9 fate points, 8 dice (4x d20 and d6 each), more than 70 special markers, 1 hero pad, and 1 rules / adventure booklet. All components are of robust quality, with stylish artwork and sometimes very nice fluff text, and clear rule texts. The rule booklet especially shines here, as it is so clearly structured that one quickly learns how to play and there hardly remain any questions. Really great! Overall, really good quality for a well-justified price of € 39.95.

Verdict: It’s not often the case but in this instance I am very excited about the product. Great concept, great game mechanics, great text – I want more of it! More tournaments, more adventures! Hurry up! 😉

3 thoughts on “Aventuria Review from Nerds-Gegen-Stephan.de”