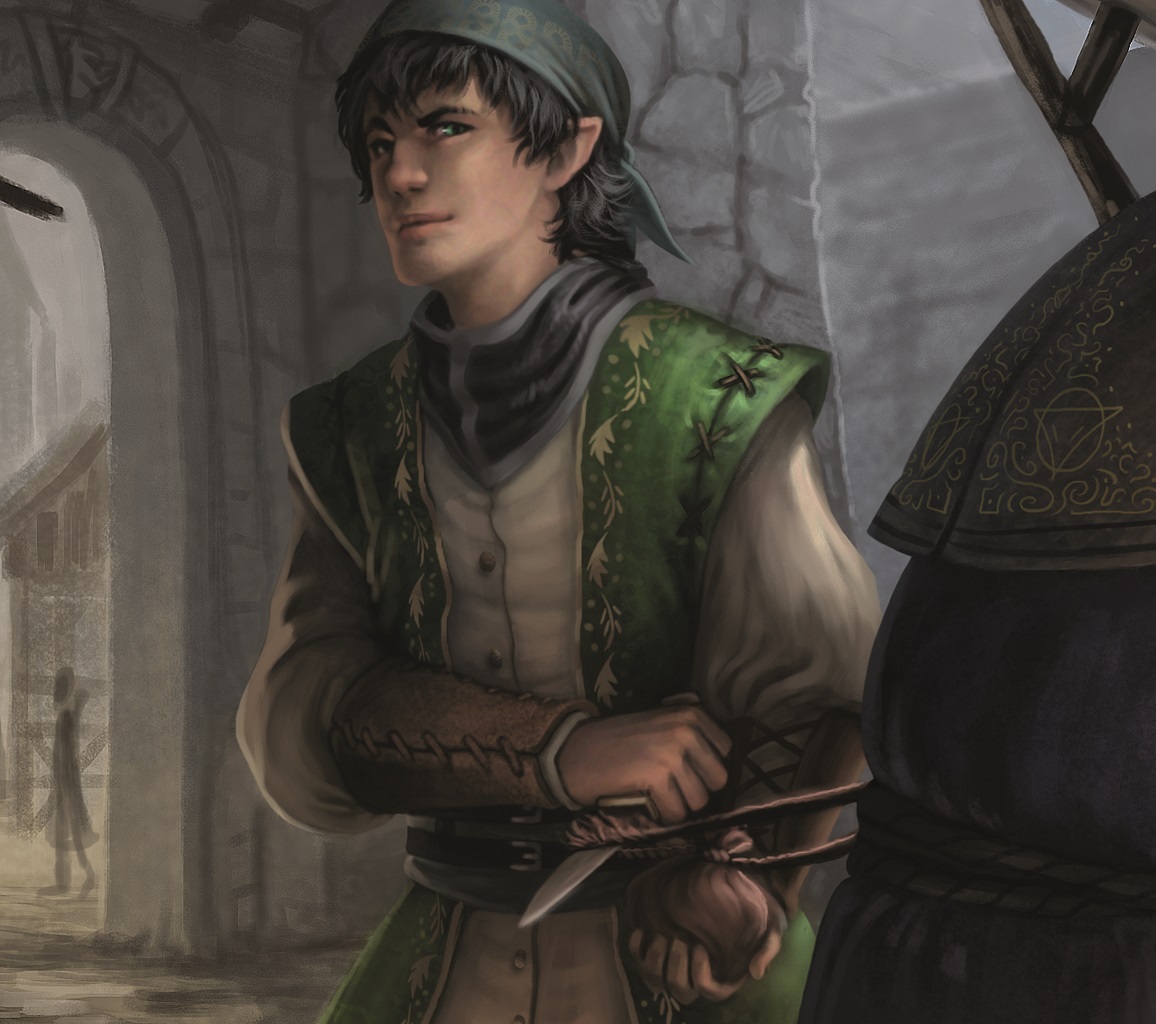 As you become more experienced with the Aventuria Adventure Card Game, you may start to notice that there are things you like and don’t like about your favorite decks. Maybe you notice that you really never play a particular card, that certain things are always your first choice to play as Endurance. When you reach that point, it’s time to start thinking about customizing your deck!

There are lot of ways to think about deck construction for Aventuria, especially given the huge variety in the heroes themselves. To help you get started, today I’ll be focusing on just one hero: Carolan Calavanti, the Half-Elf Rogue. (Or, if you prefer, Rathelia Ricottini.) As with the article on Endurance, many of these concepts can easily translate to other heroes.

The most important question to consider when starting your first custom deck is – what does this hero do that other heroes can’t? Your deck will be more effective if you build around the strengths of the hero itself. 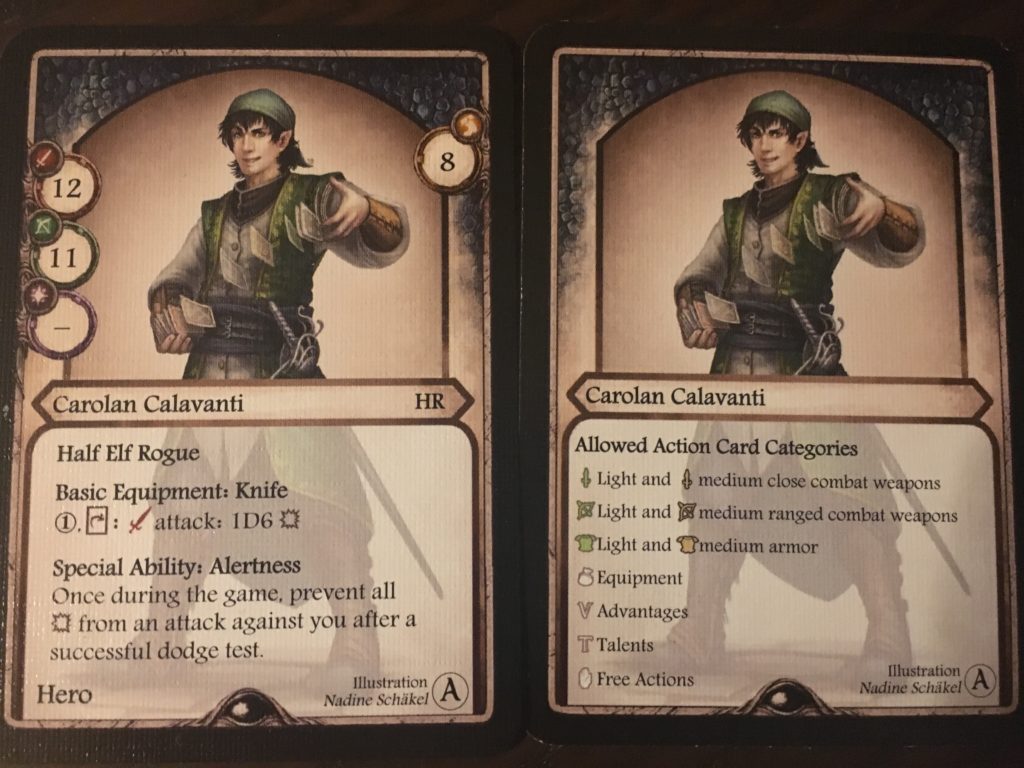 As you can see from Carolan’s Hero Card, he has good but not exceptional attack stats. However, he has the highest base Dodge skill in the game and a Special Ability that is designed to leverage his high Dodge at a critical moment in the game. Any time I have won a duel with Carolan, it was because I was so hard to kill. I just kept whittling away at my opponent’s life points while dodging nearly every attack they threw at me. To highlight this strength, I am going to double up on all the bonus Dodge cards:

This gives you a Dodge of 11 with a free reroll every turn plus two emergency Dodge boosts. This is absolutely worth 8 cards, since it is the core of the deck.

Next, you’ll want to build the attack package. As I mentioned before, your goal with Carolan is not to do a lot of big hits, especially because his weapon ratings do not allow him any of the really powerful weapons. Luckily, with his high Dodge, you have a little bit of time to build up to the best medium weapons available: the Long Sword and the Short Bow. For this reason, it’s not necessary to include a lot of “filler” weapons to use as you wait for those weapons to show up. You may want some extra Ranged Weapons to give you more of a chance to draw those early so that you have both attacks right away, but you don’t really need extra Close Combat Weapons. Here’s what I suggest:

The other thing that makes each hero unique is the set of “black text” cards. These are the cards where the two-letter deck designation is printed in black, which means that they can only be used by that hero. Here’s Carolan’s set: 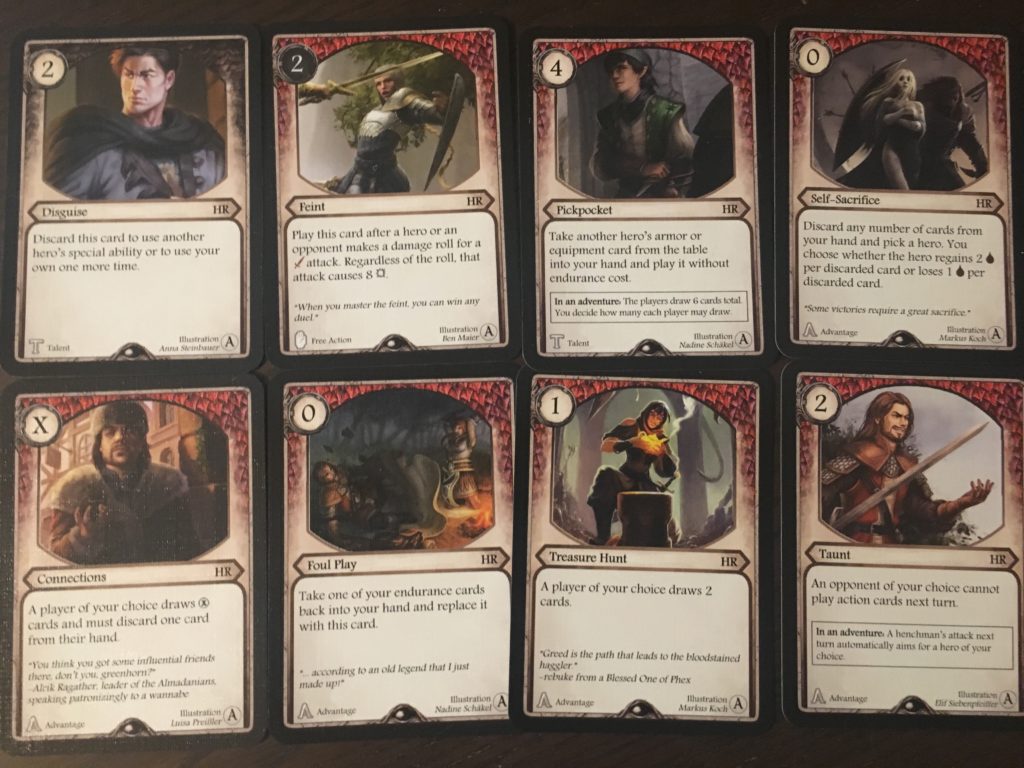 So right away you can see that Carolan’s deck is very focused on one-shot cards.  Even the one permanent card in this set is still a “discard to use” permanent. But let’s take a look at this group of cards a little more closely:

Treasure Hunt, Connections, and Foul Play are all good at cycling cards. Foul Play in particular is unique as it is the only way in the entire game to recover an Endurance card that you have played. That one is probably worth holding onto. The other two may not be as useful in a more focused deck with a lot of duplicates, which is what we’re building. They can be used to interesting effect with Self-Sacrifice with a specific strategy where you just build up a huge hand and then drop the entire thing to kill your opponent in one fell swoop. If you want to build that deck, grab all the other card-drawing mechanics and try it out. But it’s definitely not the deck we’re building right now. And for the healing effect, I would rather just put in a second Healing Potion so that I don’t have to burn cards from my hand.

Taunt is a card I rarely use. It’s good early on to slow your opponent down, but the 2 cost also means you’re likely slowing yourself down. I am rarely willing to take that tradeoff. Every once in a while you might be able to time it just as your opponent is getting out the big expensive weapon or spell, but that’s hard to guarantee.

Disguise, Feint, and Pickpocket are the cards that go best with the strategy we’ve developed so far. Disguise supports the Dodge strategy, Feint is great because Carolan’s early attacks are going to be fairly small, and Pickpocket is amazing if you happen to be facing someone with Heavy Weapons or Heavy Armor. But it’s generally useful in this deck because I don’t have a huge number of weapons. I do also like Foul Play just to stay flexible, so I will toss it in there. Here’s what I will keep:

At this point, I have 10 card slots left, and a lot of those are going to come from what is already in Carolan’s deck. I mentioned that I wanted to double up on Healing Potion, and I may want to add a piece of armor or two. But otherwise it’s going to look fairly similar:

Note – There is just one card in this deck that you will need to get from expansions: the extra Vigilance (from Tjalva’s deck). If you only have the base set, you can replace that with either Danger Sense or Self-Sacrifice to help your overall survivability. Most of the extra cards I’ve selected come from Layariel’s deck, and a few of them come from Mirhiban’s.

This specific deck is built for duels. However, the principles of construction can also be applied to customizing your deck with Reward Cards as you advance in the Adventure Mode. Look for the cards that will play to your character’s strengths, and consider removing the cards that you tend not to play. (Those may be different in Adventure Mode, since some of the card drawing mechanics are more effective for a team than for an individual.)

And as always, make sure that you are paying attention to the card limits. (The Construction Charts are now available on the Downloads page.) If you keep a balanced spread of card types, you’re unlikely to run afoul of these limits too often, but they exist to keep you from putting together a deck that is too focused on one thing.

Have fun, and watch out for the Irrhalk!