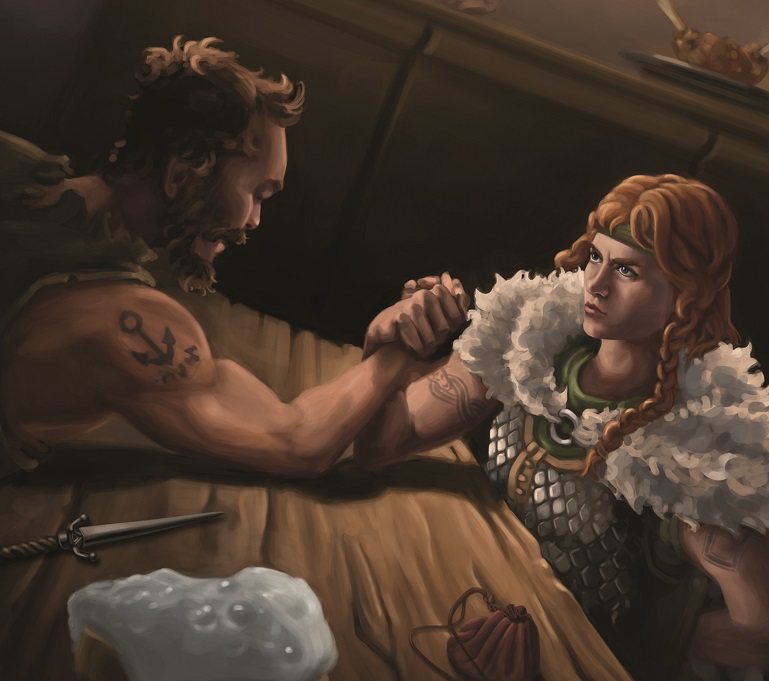 The Aventuria Adventure Card Game is now in the hands of our Kickstarter backers, and we’re going to be selling and playing the game at Gen Con, so this seems like a good time to start discussing some of the finer points of strategy. I’ll be posting a few articles over the coming weeks talking about ways to think about the game and improve your play.

The Endurance game mechanic is one of the most unique and important aspects of Aventuria. It takes some players a few games in to get a sense of how to balance that choice of immediate resource or delayed effect. Often starting players will look at their opening hands and just put down the two cards they don’t know how to use as Endurance. This is perfectly fine for your first couple of games, but I would like to explore this process a little more in-depth.

Today I will be doing some test draws as Layariel Treetopglint, the Elf Scout. I’ve chosen her because she is the most versatile of all the heroes, which means that her Endurance choices are both more difficult and more important.

Here’s my first test draw. As you can see, there are 7 cards, my 5 starting cards, plus the 2 I draw at the start of my turn: 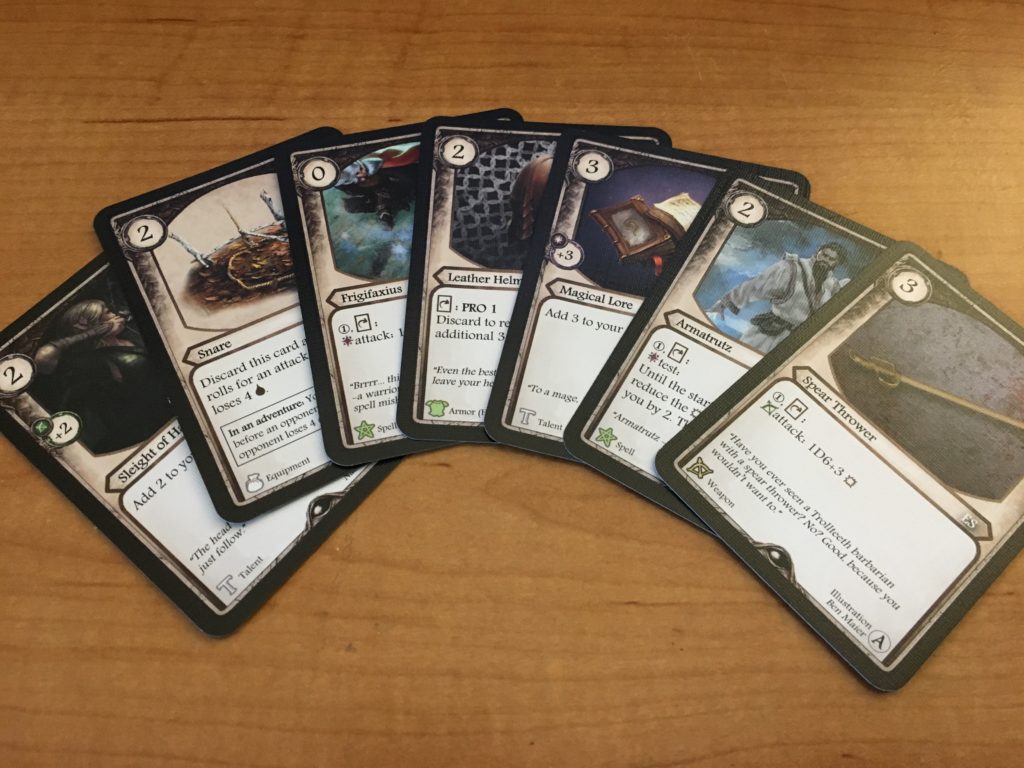 Layariel isn’t quite as susceptible to duplication as other heroes are, but she’s not immune. In this hand, we see that I have two protection cards: Leather Helm and Armatrutz. These cards fill similar functions, but with slightly different priorities. The Leather Helm is cheap to use, but it only protects 1 damage from 1 attack per turn. Armatrutz is more effective but less certain. It also costs an Endurance to use. Overall, Leather Helm is more effective for the early game, while Armatrutz is better for the late game. For Layariel, I would usually choose Leather Helm over Armatrutz in my starting hand, except that I’m also sitting on that Magical Lore. Changing Layariel’s Magic skill from 9 to 12 makes a huge difference in the effectiveness of that spell. I will happily keep the 60% chance to reduce ALL attacks by 2. (Note – This is especially true if I am in an Adventure. Armatrutz is MUCH more powerful against multiple opponents.)

Leather Helm goes down as an Endurance.

Looking at the remaining cards, I need to do a little planning about my overall strategy. Layariel’s strongest attack is Ranged, and I have both Sleight of Hand and Spear Thrower, the second best Ranged Weapon in her deck. I definitely want to build my early game around those two cards. I’ve already decided that I want the Magical Lore to boost Armatrutz, so I’m down to Frigifaxius or Snare. Frigifaxius is a weak attack, but it’s also cheap. Since I’m building my strategy around the Spear Thrower, I want to have a second attack in another skill to help me build up Fate Points. Frigifaxius is perfect for that. Snare is great against high armor or high dodge opponents, but it’s just a one-time use. I would rather see it later in the game, and I do have another one in the deck.

Snare goes down as an Endurance.

At this point, I have a good enough hand that I have my first three turns planned out. They might change if I get something better on my draws, but I know that I have a strategy to build on. Here are those turns:

Then on the following turn I play Magical Lore and continue to build my game based on what I draw.

Okay, let’s take a look at another test draw: 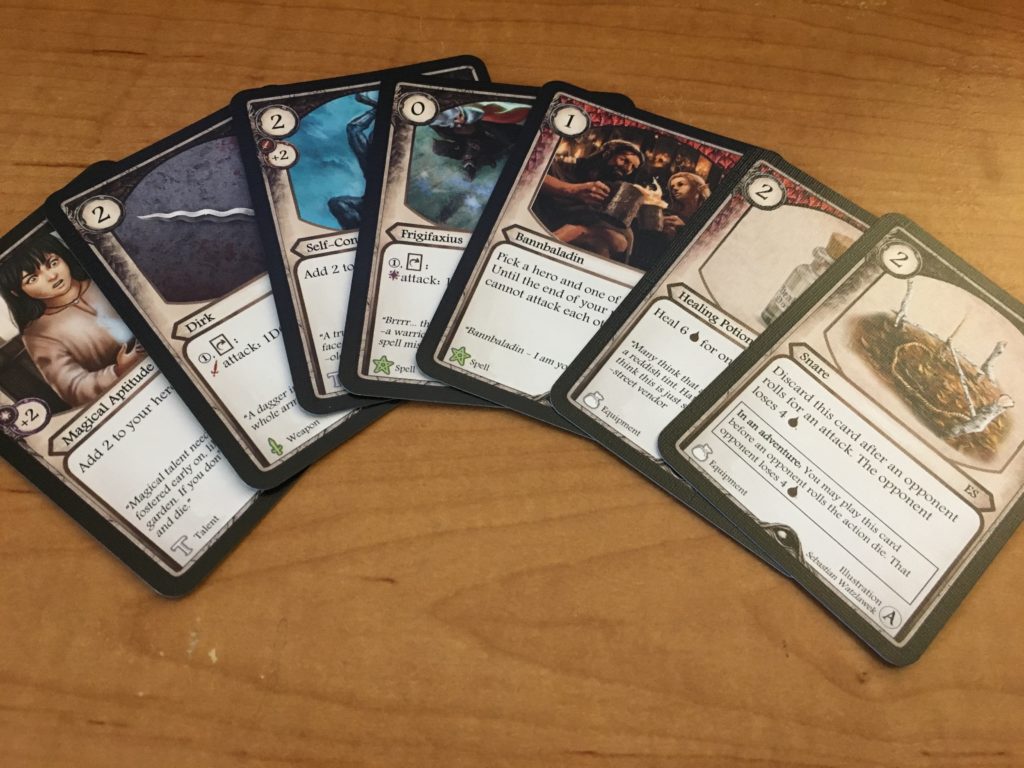 There’s that Snare again. They come up fairly often. Again, I might consider it if I am in an Adventure staring at one of the 3 Armor or 10 Dodge Henchman Cards, but I would rather get my deck going than waste early resources on a 4-point hit.

Snare goes down as Endurance.

I have a pretty amazing start with the rest of the hand. This really shows off Layariel’s versatility, and I’m probably going to go for the multi-attack strategy this game. That means I want all four of those first few cards to set up the 3 attacks per turn that I want to be able to do. That leaves me with a choice of two one-shots. Bannbaladin is frankly very situational. In some Adventure scenarios it can be very effective to choose the Leader or other multi-acting villain and the starting player as the targets for Bannbaladin, but in most cases I would rather have the Healing Potion.

Bannbaladin goes down as Endurance.

Then after that I should have three attacks per turn. Note that each time I am ending with the Dirk, at least until I get a better Ranged Weapon. That’s because I want the chance to pick up Fate Points from missing with the other attacks and then use them on the bigger hit.

I hope this helps you get started on deeper considerations of strategy. If you want to discuss these or other strategy thoughts, join us in the Aventuria section of our forums!