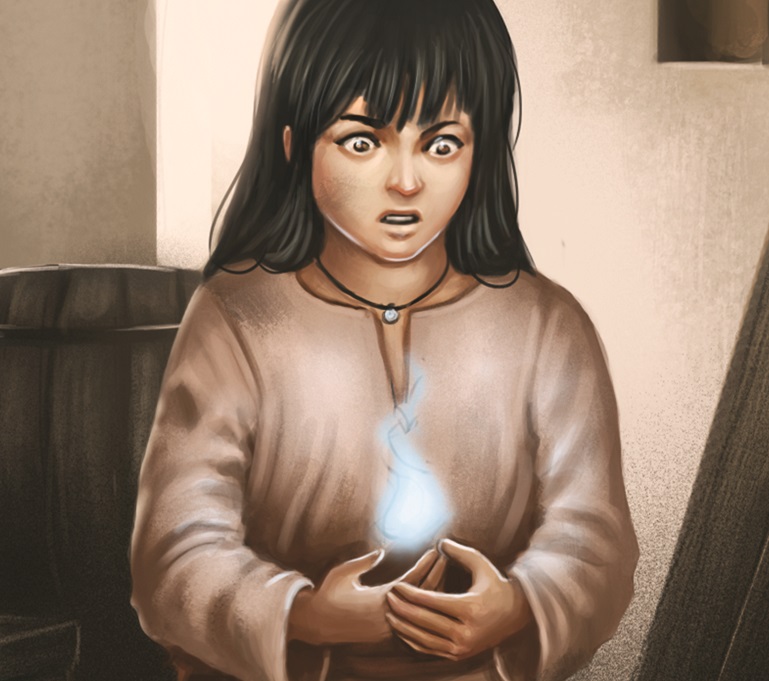 Last time, I talked about diving solo into the first chapter of the longer adventure in the Aventuria Card Game base set, “Legacy of Wildenstein.” That was definitely a challenge, but eventually Mirhiban Al’Orhima won out and made her way towards Castle Wildenstein to claim her heritage.

This time, things went a little better. Let’s talk about why…

(spoilers for “Legacy of Wildenstein” below)

Mirhiban struggled in Chapter 1, largely because she has difficulty hitting multiple targets, especially heavily armored ones that are hitting her very hard while she’s building up. She’s very fragile, so Henchmen and Leaders that are focused on damage are likely to make her life difficult.

In the second and third chapters, Mirhiban has a distinct advantage over other heroes that I was able to leverage very well. So well that I played through both chapters in one sitting. 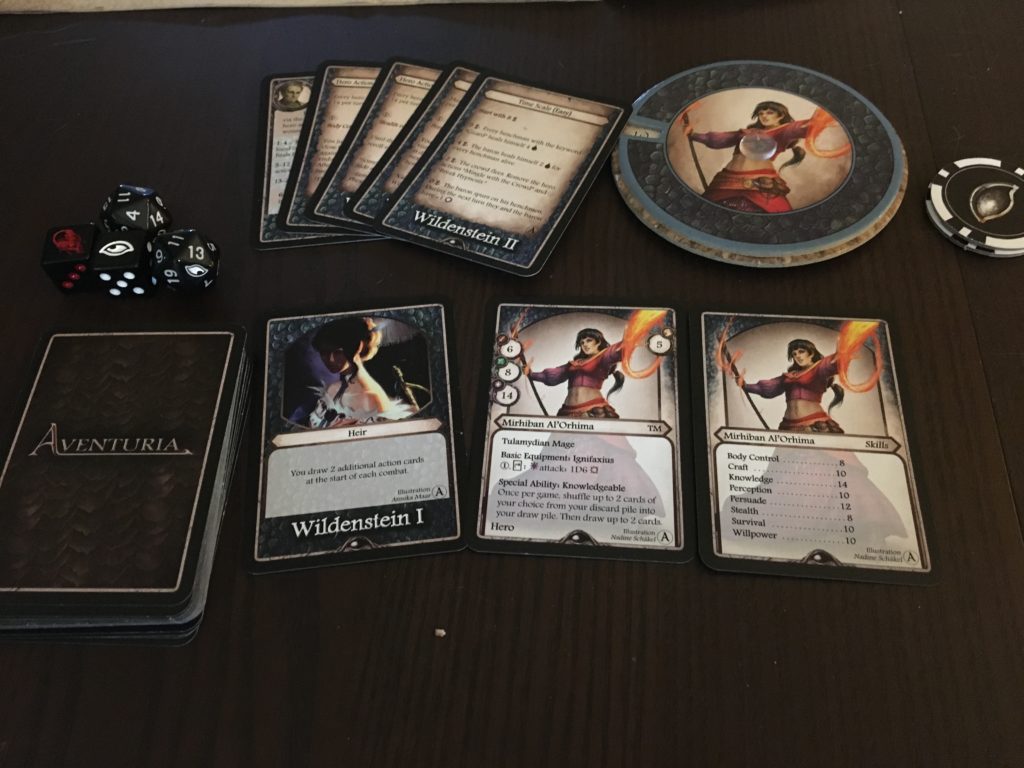 During the story phase, I failed two out of the three skill rolls, which was not an auspicious start. Luckily, the one that I succeeded on was the one that gets you an Amulet, so I was generally happy with the results. Losing a Fate Point and two Life Points wasn’t great, but I felt I could work with it. 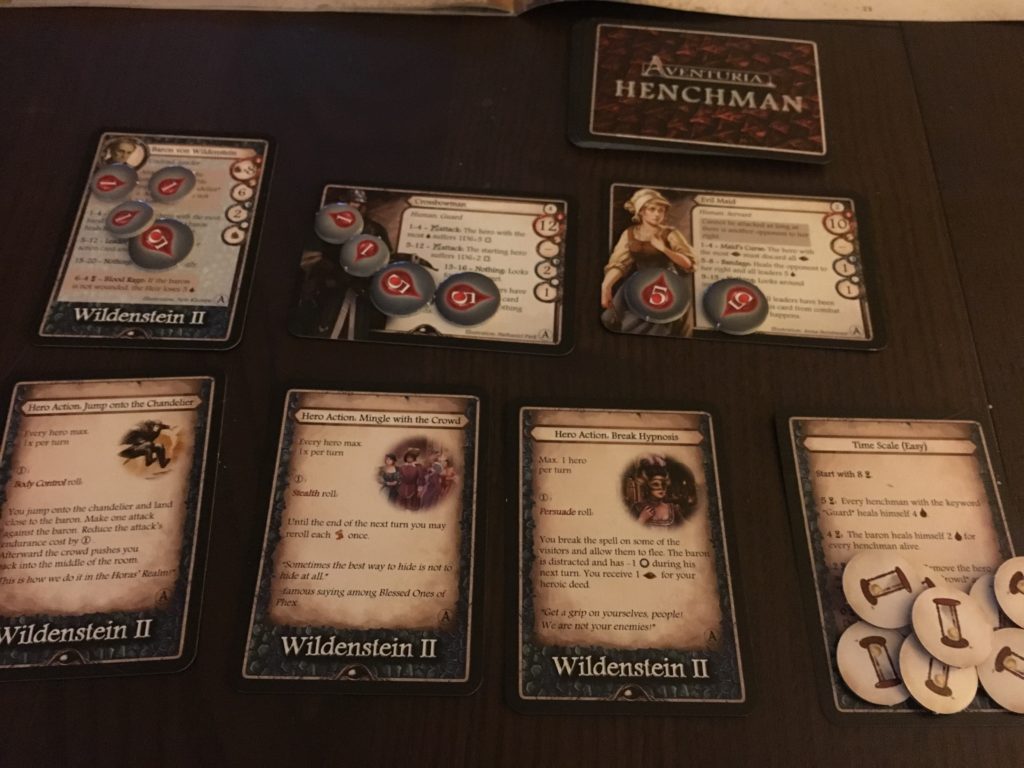 The combat setup proved to be fairly friendly. While the Evil Maid can be annoying, she doesn’t hit as hard as some of the guards I could have been facing right off the bat. Drawing her along with a Crossbowman made me feel fairly confident about my first few rounds.

The initial boost from The Heir card continued to give me an excellent start as well. Once again, I started with Arcane Meditation in hand for an easy 4-Endurance 1st round. (This would happen again in Chapter 3.) With that, I managed to get Magical Lore out on that first turn to boost my Magic stat to 17. My attack wasn’t very effective, but that got me started quite well.

The enemies did almost nothing to me in the first two rounds. There were some Leader Actions that ended up with Strengthen coming up twice through a Twist of Fate, but since I wasn’t going after the Henchmen, that didn’t matter. My focus was on getting the Baron down, since victory can be achieved by defeating the Baron with the Heir still alive – you don’t have to defeat the Henchmen at all! This is supposed to be limited by the fact that you need to use the Jump onto the Chandelier hero action to attack the Baron, which means you can only attack him once per turn. But Mirhiban has plenty of options that aren’t attacks!

So this is what I was working towards – using the cards that aren’t attacks as much as possible. In the 3rd round I pulled off a Nightmare Form with x=3 and managed to roll a 6! Then in the 4th round I got out my Call Djinn and finished the Baron off with 5 time tokens and nearly all my health left!

With the Brief Respite rules, I used 4 of those time tokens to put Call Djinn in play at the beginning of the next combat, and this made Chapter 3 even more of a breeze… 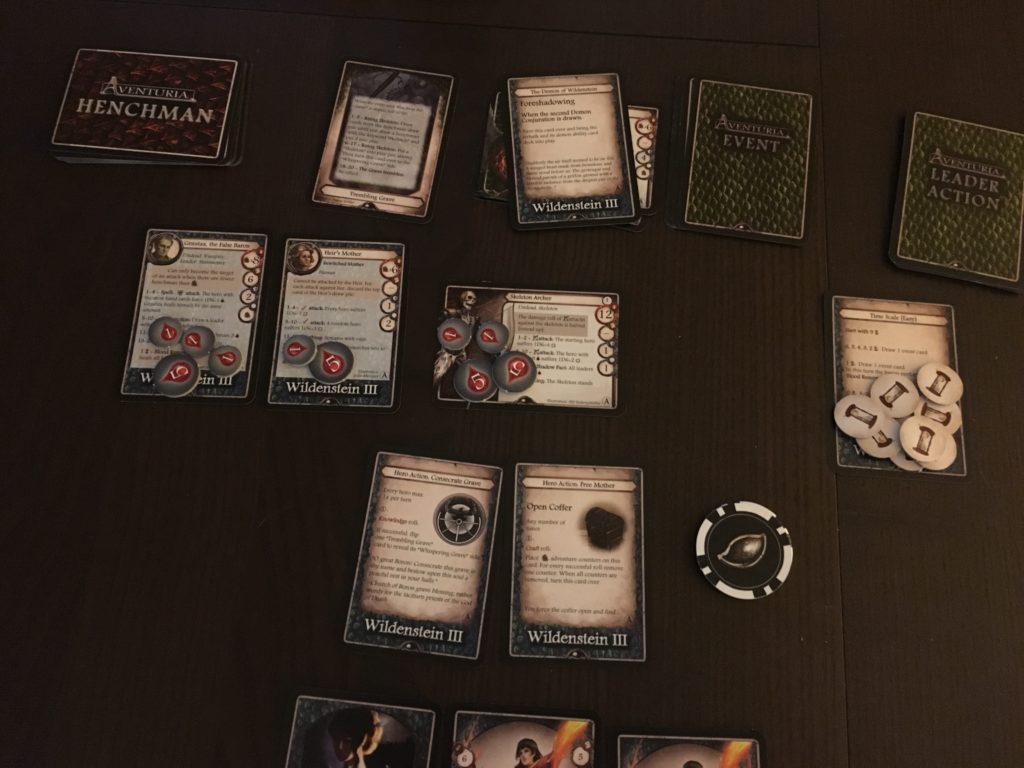 As you can see by my setup, there’s quite a bit happening in Chapter 3. This is the adventure that brings together all the mechanics from the base set. There are Events, Leader Actions, Graves, and of course the dreaded Irrhalk. I knew going in that I would need Call Djinn if the demon came up, because he has a ridiculous amount of armor. But I knew Call Djinn would be useful against the False Baron as well, so I was happy to have it out for free to start the game.

My skill rolls went fairly well this time – two successes and one failure. The only effect of these rolls was to start with one less Time Counter, but since I was playing on Easy, that wasn’t too bad. My Henchman draw gave me a Skeleton Archer all by himself, which was perfect.

I did take a few more hits during this combat compared to the previous one, so I did work a little bit on taking out Henchmen taking the Hero Action to Free Mother. I managed to flip the Free Mother card to the other side, but did not complete that action before the end of the combat.

Combat still ended fairly quickly. I whittled away at the Skeleton Archer, though he was soon joined by an Armored Skeleton. However, in the 3rd round I managed to kill both the Archer and the Armored Skeleton with a combination of Call Djinn and Invocatio Maior. Then, the next round I easily took down the False Baron using Call Djinn and Nightmare Form together.

I did not get the extra xp for freeing my mother during combat, simply because I moved too quickly. However, I was happy to move quickly enough to avoid allowing the False Baron to complete the summoning ritual. I got through the whole fight without seeing the Irrhalk.

And so, Mirhiban Al’Orhima has secured her place as the Heir of Wildenstein. Perhaps she will invite her friend Arbosh for a feast, if he’s willing to brave the road again…