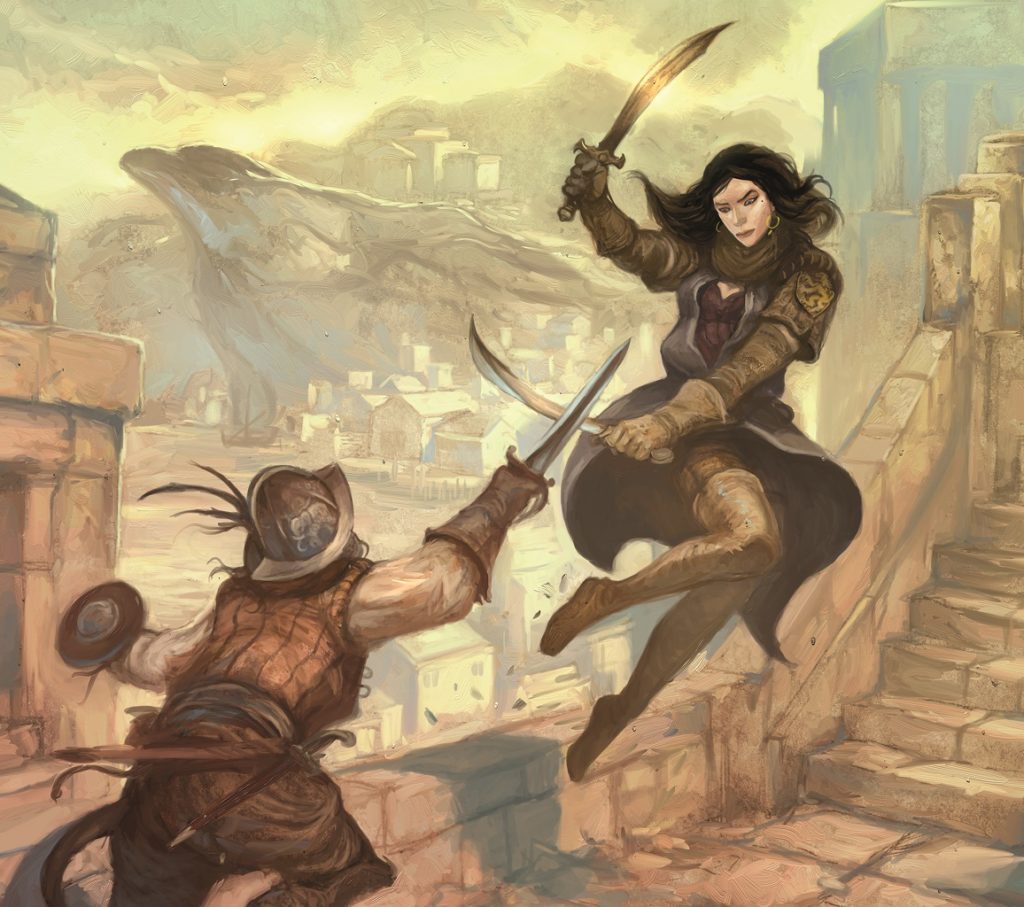 Next week is Gen Con!

We’ll be teaching people Aventuria throughout the convention, both at our Event Hall space and at our booths. (See our Gen Con post for more details.)

We will also be holding two different tournaments, and there is still plenty of space at both! One thing we want to make clear is that both of these events are great for new players. We’ll be trying to steer people into the tournaments who have just learned the game there at Gen Con, so you need not feel intimidated! We will even have decks available for you to use at both events.

Here is some more information about those tournaments:

If you are not familiar with Swiss format, the way it works is that we pair everyone randomly for the first round, and then for later rounds we match up people with the same number of points (1 point per win), always matching people with players they have not yet faced if possible. After three or four rounds, whoever has the most points is the champion. If there is a tie, then we do single-elimination matches for whoever is left.

If there is an odd number of players, we randomly assign one person with 0 pts to sit out and receive a free point (a bye) for the next round.

Seven players (A through G) are playing the tournament. Player G gets the bye for the first round. The pairings are as follows:

A, B, and C each win their matches. With G’s bye, that means 4 players have 1 pt and 3 have 0. F gets the bye in the second round, and the pairings are as follows:

Whoever wins between A and B will be the champion.

This example generally shows all the variations that are likely to happen. Everything else is just an expansion on this model.

We will break up several base sets and a few expansions for use at the tables throughout the conventions. If you have purchased the game (or brought decks from home), you may play your own copies of the decks. If you want to use ours, you can choose whichever hero you want.

We will provide decks for Saturday as well, but the players will have to play them as-is. Only people who bring their own can customize.

For the pre-gen tournament, we will use the main hero decks from the base set and the first three expansions (through Heroes’ Struggle). All of those will be available for players to use if they do not have their own.

For the open tournament, we’ll use the standard customization rules, allowing promo Hero cards but NO Reward cards. With this style of tournament, you are also allowed a sideboard of 5 cards that you can swap into your deck based on the hero that you are facing. However, each player bringing a custom deck must submit a deck list. If you do not have your own cards, you can still use one of our pre-gen decks for this tournament as well.

If you have any questions, feel free to talk to us at the Event Hall or at our booths. We’ll be happy to help!