Let’s talk about gamemastering. The gamemaster plays the NPCs the player troupe encounters in their endeavors. To lessen their load, not all NPCs are created equal. Fading Suns presents three types: Headliners, Agents, and Extras.

Headliners are the main movers and shakers, acting as adversaries, rivals, villains, or even helpers. They get all the same traits that player characters do, and they can bank victory points (VP), giving them more resources to draw upon when they’re rolls prove unlucky.

Agents are captains, bosses, alien creatures, and friendly faces who interact with troupes enough to make dice rolls important, but they’re not as resourceful as Headliners; hence, they don’t have VP banks (they use whatever cache of VP they gain from rolls on a turn-by-turn basis).
Extras are simple adversaries and one-note characters: the town guard, the wandering penitents, the market hucksters. They’ve got very streamlined traits and only a standard amount of Vitality. Also, they can’t shake off influence states, such as Daunted or Entreated. 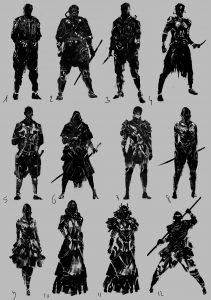 The player troupe might encounter a band of pirates, a group of cutthroats (Extras) led by a second mate (an Agent) who, if things go bad, will call in the captain (a Headliner). Or they might encounter their old rival, Deacon Eusebius Snarg (a Headliner), and his squad of honed inquisitors (all Agents), but one of the troupe calls upon the oppressed villagers (Extras) to rise and stand with them against the religious tyrants.

The player troupe has a special resource: the troupe coffer. This holds wyrd points (WP) earned by individual members which are pooled together for use by the whole troupe. The gamemaster gets an adversary coffer. Whenever a player rolls a critical failure, the GM gets a WP to put in this coffer, and they can spend it whenever they want to improve the fortunes of any NPC, whether Extra, Agent, or Headliner. (You can find out more about the specific uses of wyrd points in the new edition’s rules chapter; they’re not just for psychics anymore.)

It’s an NPC’s job in Fading Suns to weave intrigues that create escapades for the player troupes. In fact, that’s the title of one of the books for the coming Kickstarter: Intrigues & Escapades. Think of it as a primer on cutthroat society. It provides essays on how nobles are trained from cradle to grave to navigate their rivals’ schemes and to create their own, how priests can both praise the Pancreator’s grace and also work to ensure that grace falls more upon them than others, and how merchants dream big while foisting all the risks onto fall guys. More, Intrigues & Escapades includes detailed dramas for thrusting troupes into trouble, complete with NPCs, plots, scene-by-scene incidents, and maps.

And, of course, we’ll provide that old standby for tabletop gamers: the Gamemasters Screen. This sturdy four-panel screen hosts useful rules and charts: sequence of play, VP costs, Resistance ratings, environmental conditions, weapon traits, and more. It also comes with punch sheets with a plethora of victory-point and wyrd-point tokens, making it easy to gain and spend these action resources during play.

That’s still not everything that comes with this Kickstarter! There’s a lot more, but we’ll have to tell you about that another time.
Alea iacta est.

Calling out Across the Universe

2 thoughts on “Behind the Screen”