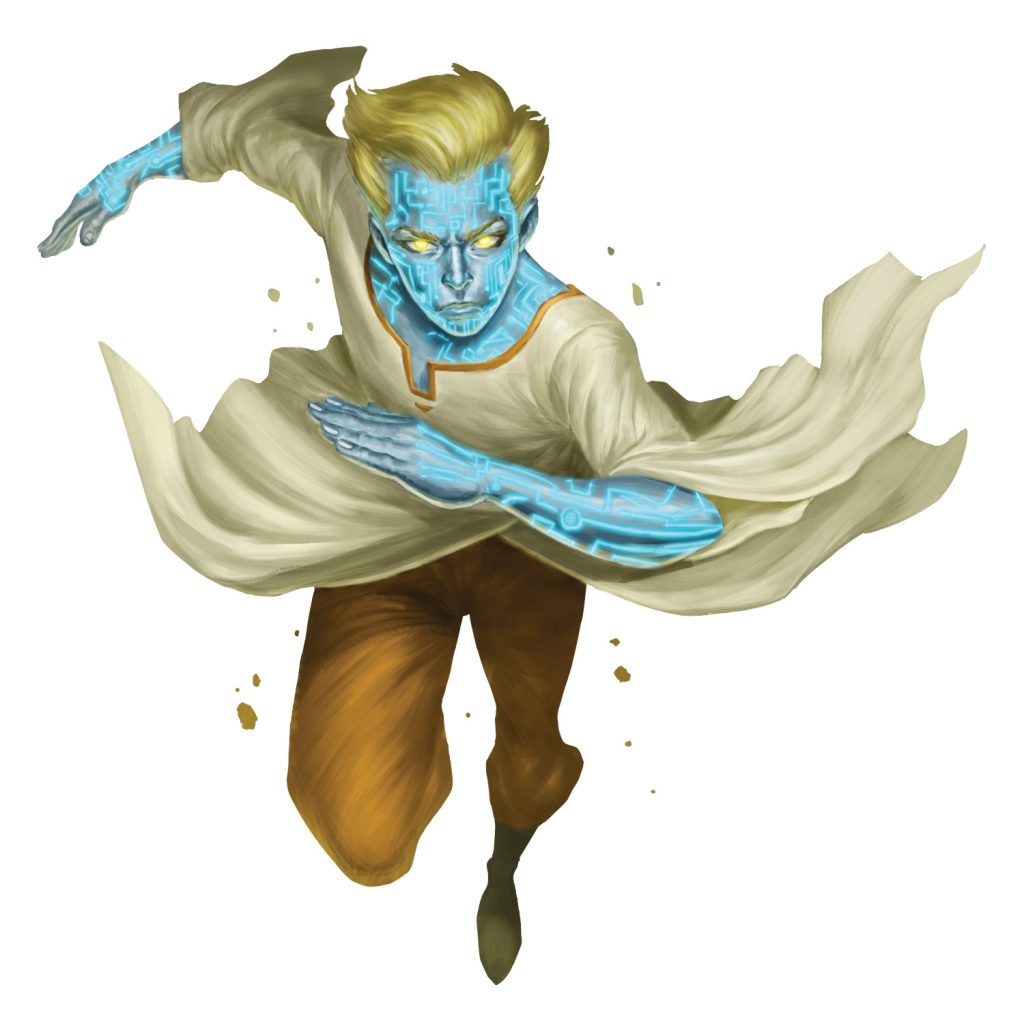 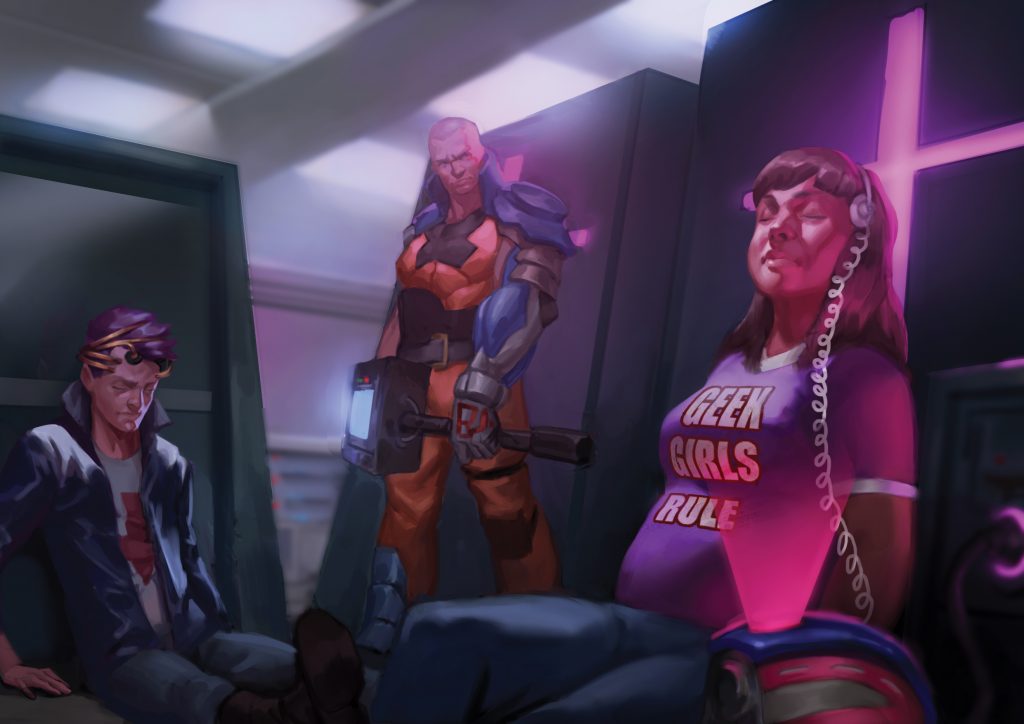 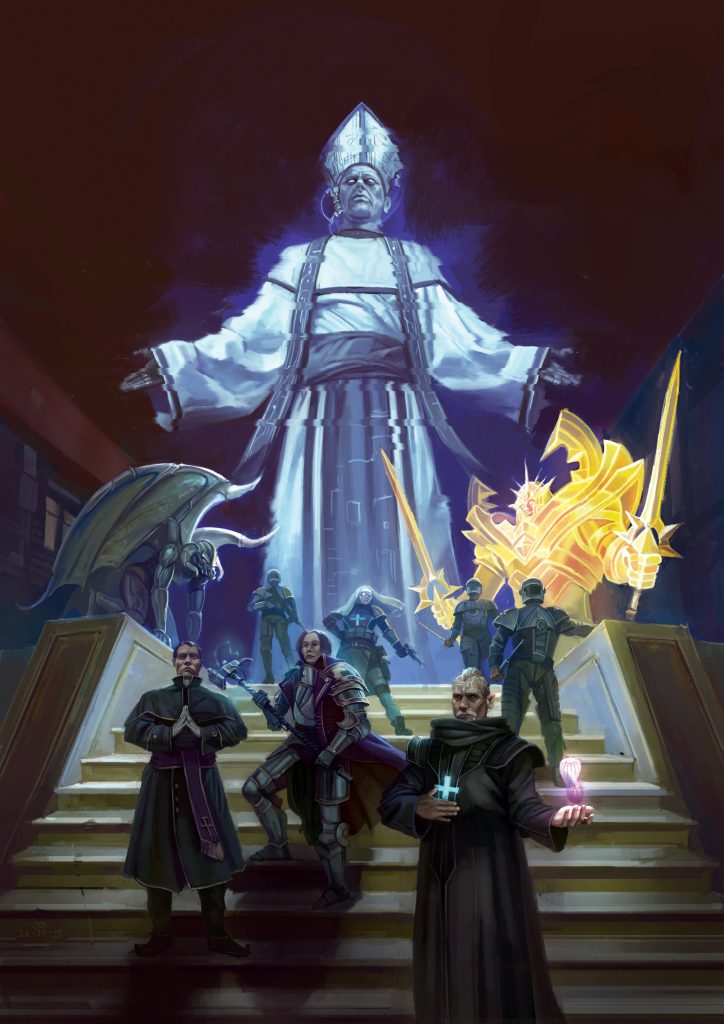 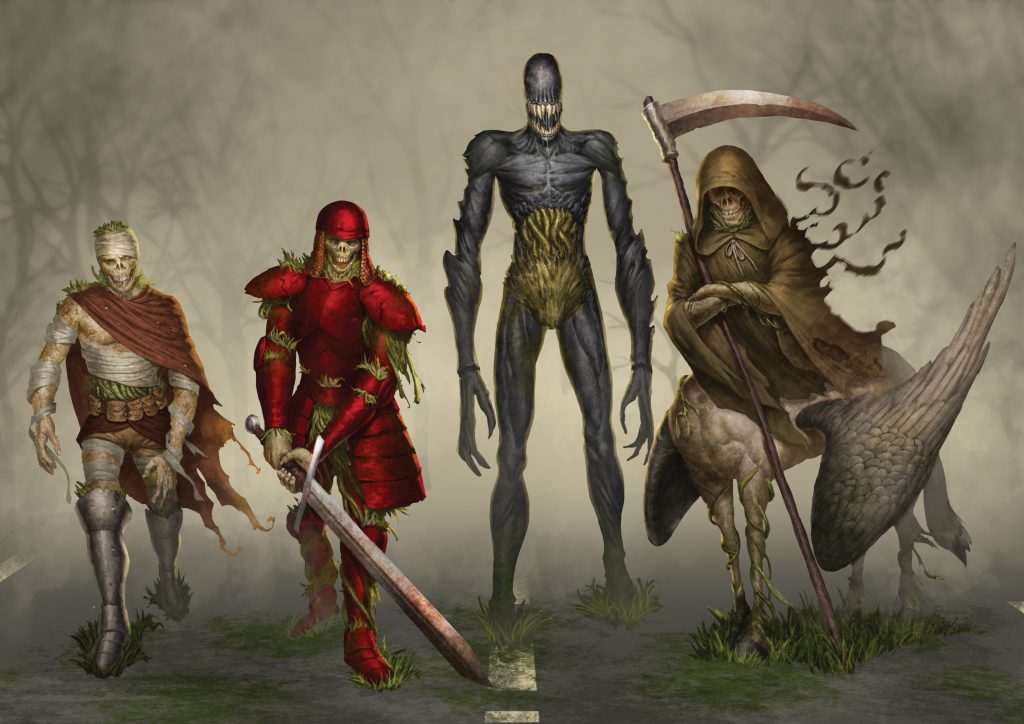 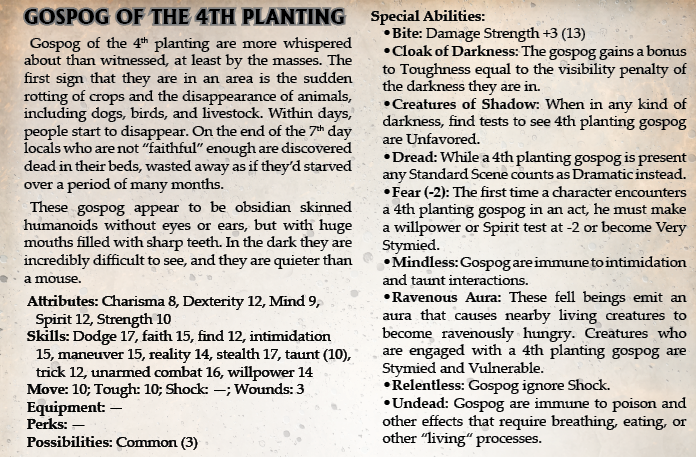 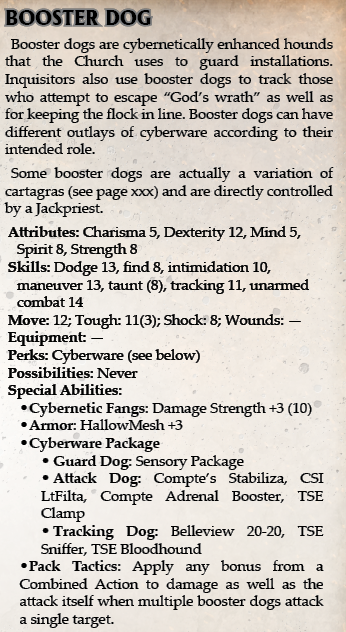 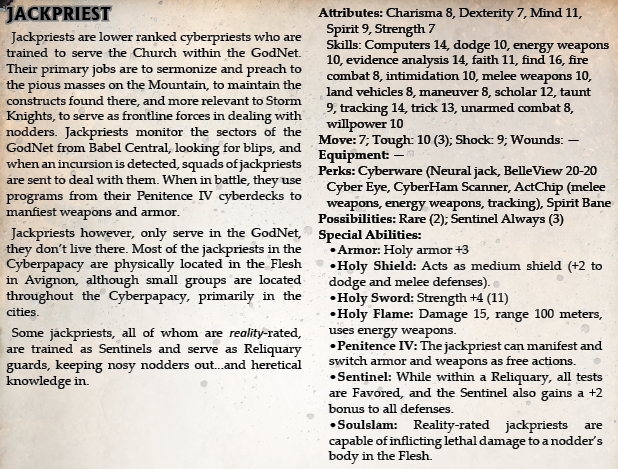 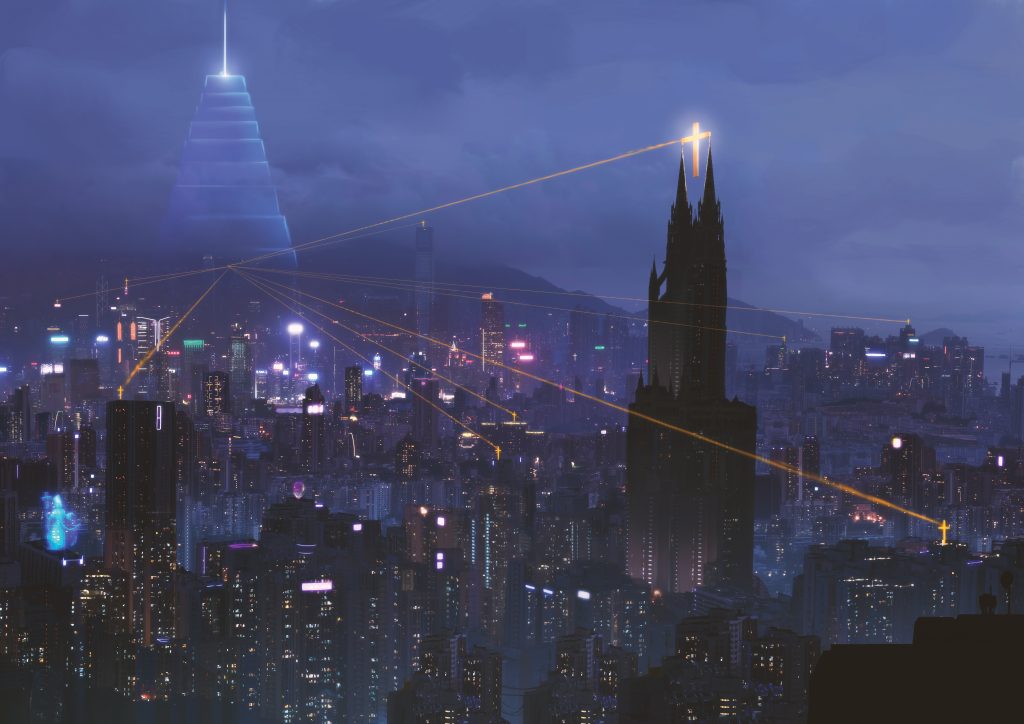 This week we’ll take our first look at the GodNet, the virtual reality network that covers the entire Cyberpapacy.

Here’s a sample page near the beginning of the book that summarizes what the GodNet is: 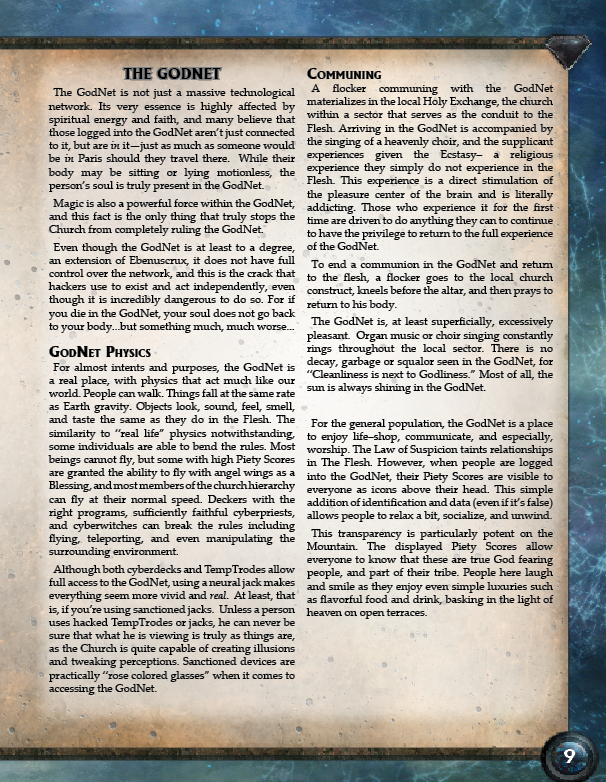 There are three different regions of the GodNet. The Promised Land, which is the vast landscape of sectors that overlay the Cyberpapacy, but also includes “the Flesh” as GodNet entities and people jacked in to the network can manifest outside the GodNet via holograms, hardlight or otherwise. The other two regions are summarized below: the Mountain and the Land of Nod. 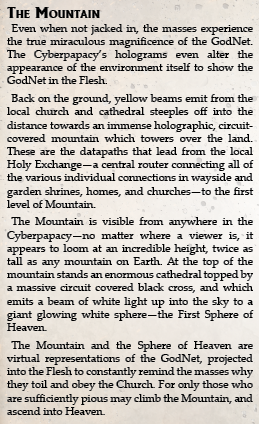 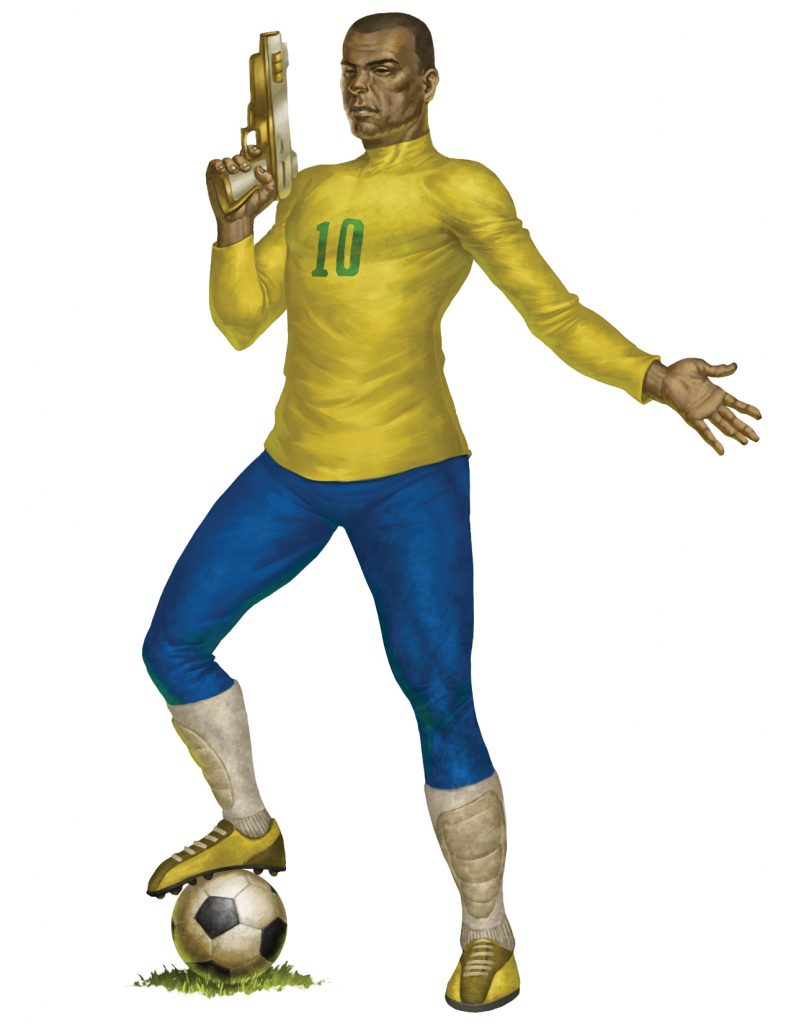 We’re going to switch things up a bit for this week and show you the introduction vignette for the Cyberpapacy Sourcebook: 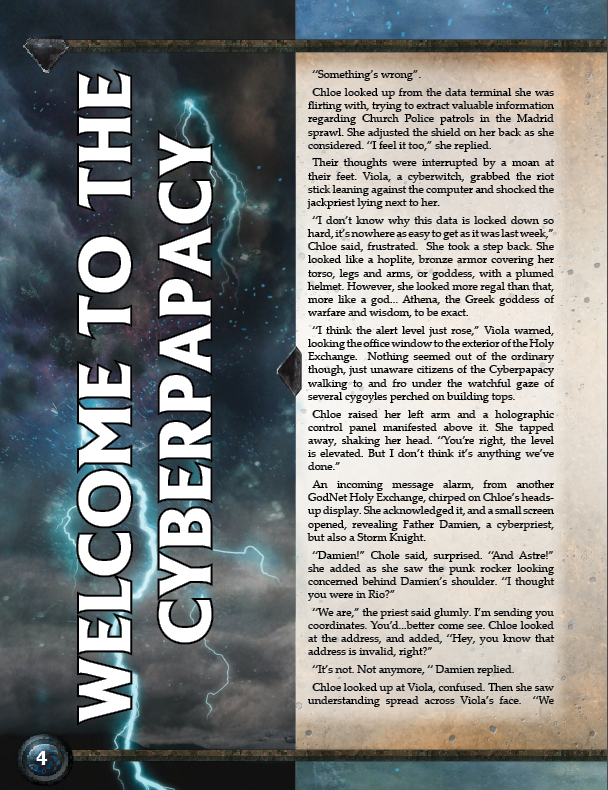 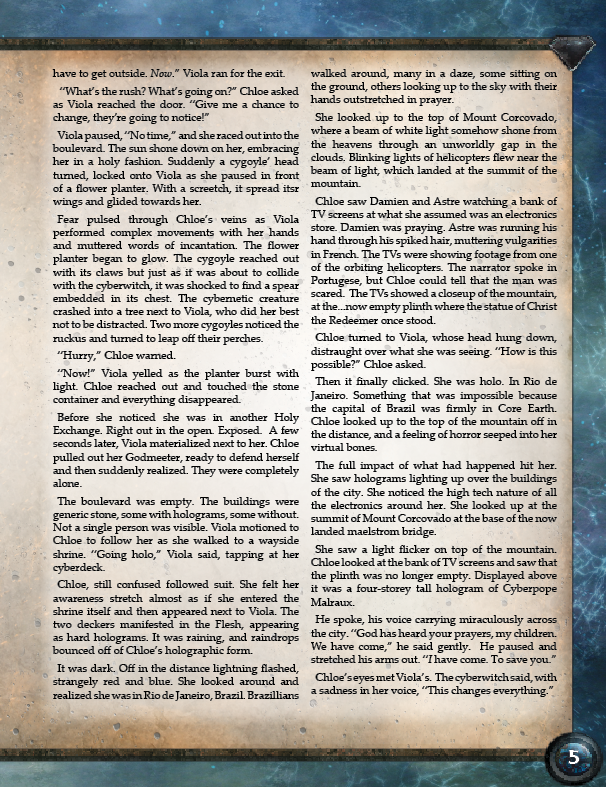 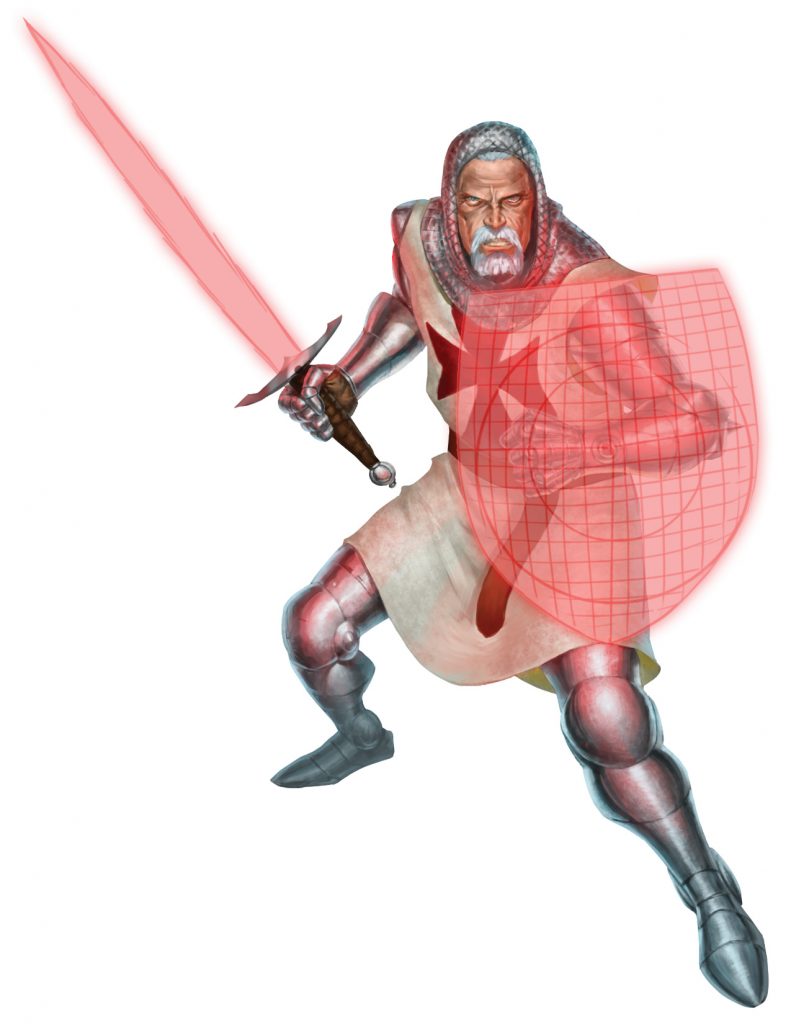 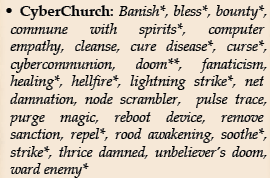 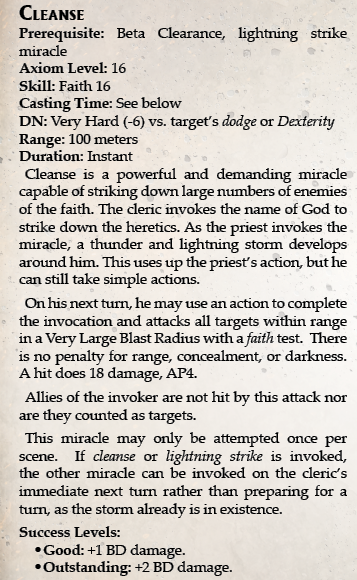 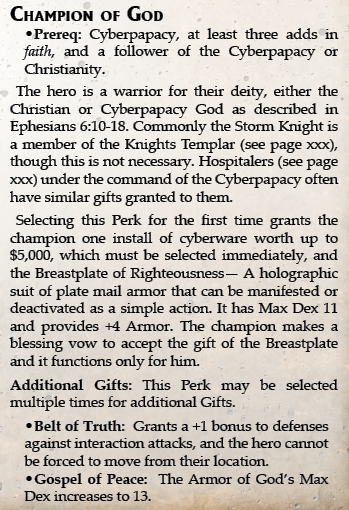 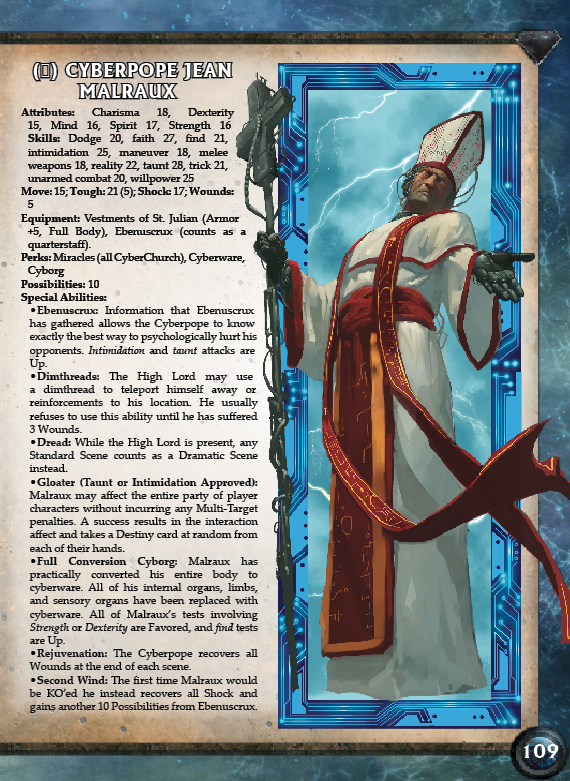 Today we’re going to take a look at the High Lord of the Cyberpapacy and his Darkness Device.

Jean Malraux was born a bastard, one who reported his own mother to the Inquisition as a heretic.  He joined the Inquistion himself, but after his master, who had become a father figure to him, was killed by a demon accidentally summoned by a witch, he made it his life’s mission to eradicate witches from Magna Verita.

Realizing that remaining an Inquisitor prevented him from bringing his vision to the Church, he joined the clergy, but despite his success his parentage blocked him from becoming a Cardinal. He travelled to Mount Sinai and prayed for a sign that his mission was right.  6 days later those prayers were answered.

Ebenuscrux came down from Heaven and claimed to be an archangel sent by God to teach Malraux a new skill: politics. Within a couple of years Malraux was elected Pope to the shock of the Cardinals who had prevented his rising even to their ranks.  Malraux quickly dispatched his enemies and took solid control over the Church.

Soon after he introduced the Malraux Bible, subplanting the Julian Bible which had been the Church’s holy book for centuries. After leading his people on the first Great Crusade, bringing the Word to a whole new world, he became the first Cyberpope,  and instituted the One True Way, which in a single day defeated the forces of the Pagans.

Malraux is nearly the opposite of Doctor Mobius. He leads on the Holy Vids, but he does not get his hands dirty. He is moody and violent, charming yet manipulative. He truly believes that he is doing the right thing for his people, even if he has to control them with an iron fist to get them to realize it.

The truth, however, is that Malraux isn’t in control.

Furthermore, Ebenuscrux doesn’t just have the goal of being the Darkness Device that aids its High Lord to become Torg. It wants to become Torg itself. How exactly it plans to do this it is uncertain, but it realizes that if it wants to attain that power for itself, it needs a High Lord that it can manipulate, and Jean Malraux is very certainly that High Lord.  Much of the High Lord’s influence and political power was largely the result of Ebenuscrux’s prodding and knowledge, and the Darkness Device knows where the skeletons are hidden in Malraux’s closet. Furthermore, Malraux doesn’t realize that he’s being manipulated and he honestly believes in his soul that Ebenuscrux was sent from God to serve him and aid him in bringing his Word to other cosms.

Malraux has been increasing the defenses of his stelae in response to the Delphi Council’s attempts to free zones in other realms.  Here’s an example: 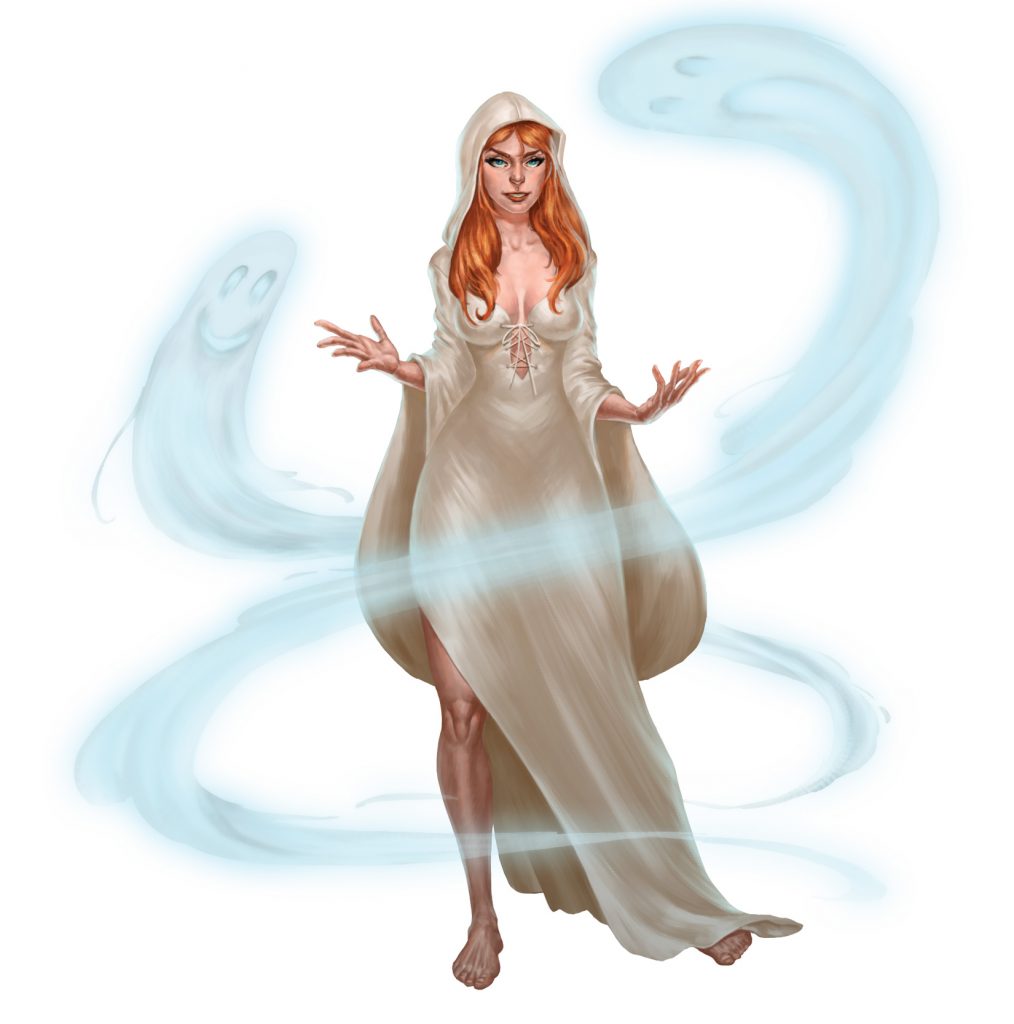 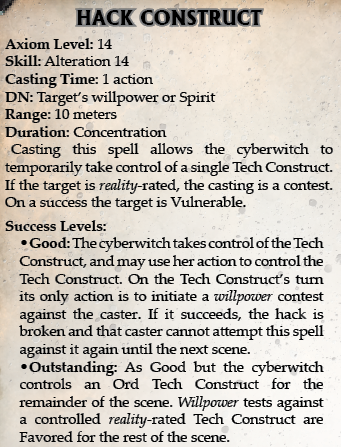 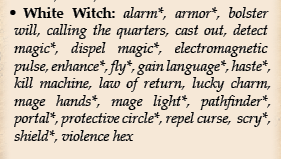 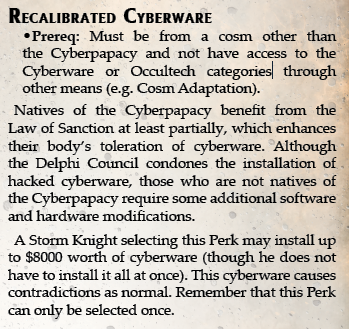 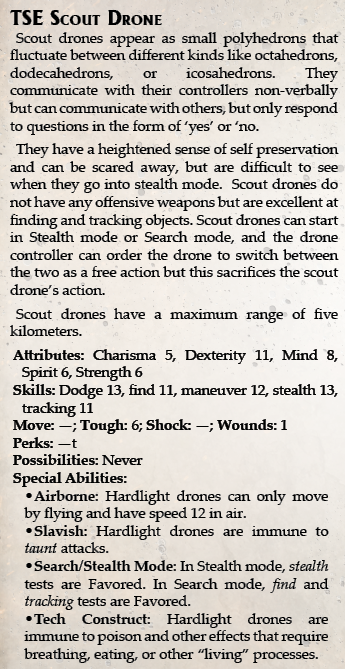 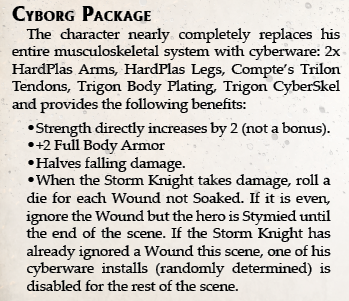