Replayability is an important consideration for us. We want Conan: Rise of Monsters to be a game you can enjoy again and again. 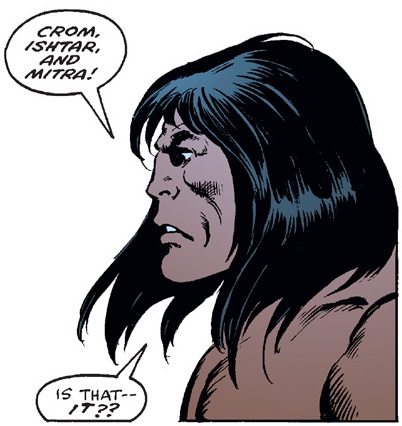 From simple battles to extended campaigns there are many ways to play CROM. Campaigns are are series of linked scenarios where Victory, or completing specific objectives within each battle, impacts the conditions for the later battles. For example, if a warlord has sole possession of ruins at the end of one battle, those ruins may be added as a legal starting zone for the next battle. A saga contains several related campaigns, and the overall victor shakes the foundations of Hyborea-destroying nations or slaying gods!

Another mechanic that promotes longer-term play is Campaign Cards. After the battle each warlord earns a card, and the victor earns two. Cards are either Enhancements or Tactics.

Enhancements are attached to a unit, and remain in the warlord’s possession between battles as long as the unit survives. Enhancements might grant a bonus to attack or defense, promote a hero to a Commander, or even add special abilities. Between battles the warlord may reassign enhancements to different units.

Tactics are sweeping maneuvers that can drastically change the flow of a battle. Unlike Enhancements a Tactic is discarded as soon as it’s played. Tactic cards alter where forces may start, allow a warlord to move crucial terrain, or gain bonuses such as extra build points or Fate cards. Campaign rewards often include extra draws, or the opportunity to eliminate Campaign cards from rival warlords.

Campaigns that take place in remote areas cut off from reinforcements are called “expeditions” and feature a twist on building forces. Each side gains a certain number of build points to recruit units for a large army, and then each battle the warlord must build a war band only from those forces available. Each unit recovers one Wound between battles. A completely defeated unit remains available, but with only one Wound is hardly battle-ready. By the end of an expedition campaign an incautious warlord may have nothing but depleted units to face a foe’s fresh reserves on a crucial front.

With these options along with our many Scenarios and Quests, we believe CROM offers plenty of variety to keep bringing you back!