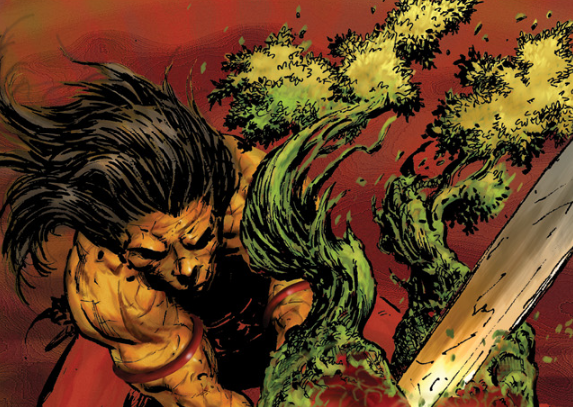 There are many different ways to play CROM. In the most basic version, Victory Points are awarded for destroying enemy units or driving them from the field. Each unit swept away earns 1 VP, and the warlord with the most VP at the end of six rounds wins.

This is a fast and simple way to play a skirmish, but there are different layers that can be added, in whole or in part, to provide depth and replayability. Scenarios add new ways to earn VPs as well as Encounters – special locations on a map that grant a boon (or trigger a trap!) upon the first unit to move to there. The unit that triggers the Encounter rolls a sigil die to determine what they find.

Quests are another optional layer, which add bonus objectives for either warlord, and may be used with the scenarios or in place of a scenario.

This quest is available for King Conan. He spots a gnarled tree on the battlefield that reminds him of a dark chapter of his youth where he spent time staked to such a tree and waiting for death. If he can destroy the tree, his team gains +2 Destiny tokens for the remainder of the battle-the benefit of Conan venting his rage and eliminating the distraction. 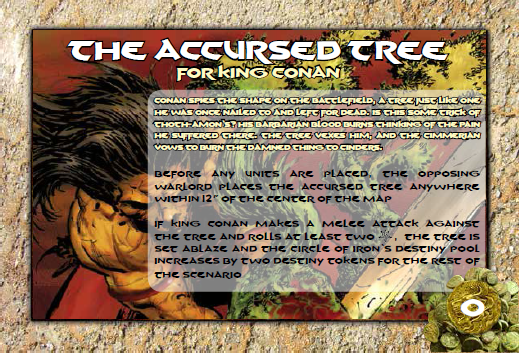 (Image and text not final)

This is trickier than it sounds though. It’s the enemy warlord who gets to place the tree, which means the enemy might be arrayed to protect it, or at the very least King Conan must take time away from the main battle to move to the tree and attack it.

Such a maneuver is risky, and possibly costly, but the payoff is immense – two extra Destiny each round. Initiative is based on the size of the Destiny pool, not to mention the extra tokens available to increase attacks or defenses.