The Apprentice is the classic “glass cannon” hero. Most of what he does is unload damage, but he’s also very fragile and liable to draw attention. It wasn’t hard to keep that feeling, so instead we leaned into it with the Dawn of Heroes version. At the same time, we did find a couple of things to improve with how the Apprentice plays.

One of the key things we wanted for the Apprentice was a sense that the various element keywords (Ice, Fire, Earth, Air) are always important. This is one of the ways that we can make the hero feel more like his intended flavor. The Apprentice is already strong, but an Apprentice who manages the elements well is even stronger. 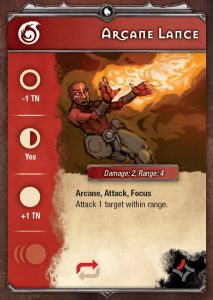 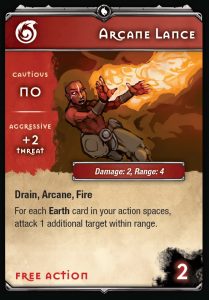 Let’s take a look at Arcane Lance as an example. The previous version was strong, but we’ve increased its potential power by tying an effect to the other cards you’ve already played this turn. It costs more now because of that, but it is almost certainly worth it if you can get even one extra target.
You may also notice that it’s a Free Action now. Remember when I said we were leaning into the “glass cannon?” Now almost all the Apprentice’s cards are Free Actions (unless they’re Interrupts). If you need to do a ton of damage all at once, you can. But don’t forget that you only have 5 Vitality, and the Apprentice is not good at running away when you jump to the top of the Threat meter.

Another new keyword on the Arcane Lance card is “Drain.” Let’s take a look at those mechanics:

The Drain mechanic is designed to do a couple of things.

First of all, it helps with the action slowdown that can happen with keeping Ongoing cards in play. Now that those cards are one of the few consistent ways for the Apprentice to gain EP, it becomes even more critical to cycle them in and out of the action spaces.

Secondly, if you want to hold on to those Ongoing cards for a bit longer, the Drain mechanic lets you play more of your hand even when some of your action spaces are occupied. 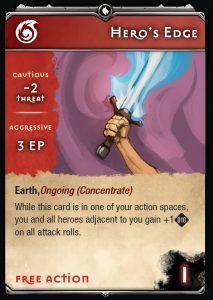 On top of hand/action management, Drain cards work interestingly with the elements, because you’ll have to weigh whether you want to keep a less optimal card in your action space just because it has the right elements for the Drain attack you’re playing right now. In that way, Drain both makes the Apprentice more accessible for new players but also more versatile for experienced players.

Please comment below with your thoughts on these changes and additions to the Apprentice.