In many ways, the Soldier is the core hero. She works well because she is flexible enough to be played in a variety of ways with a party, but also strong enough to play alone. She isn’t too focused on any one thing, but that also means she’s never a bad choice to have around. The Soldier does not change much in Dawn of Heroes. That makes her a perfect hero for talking about how we can further fine-tune the things that already work well in Myth.

By taking a fresh look at Myth, we can clarify many of the things that work fine but may be confusing to newer players. 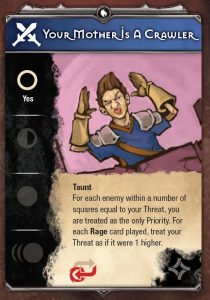 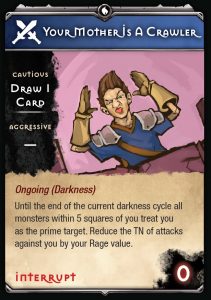 The older version of this card requires you to calculate its range of effect based on Threat plus Rage, which requires you to do some planning of both card play AND positioning before the Darkness cycle. The new version is always a 5-square radius, no matter what. The only thing you have to consider is positioning.
Here’s one of the Soldier’s mass-taunt cards, Your Mother is a Crawler:

The new card has a couple other updates on top of this. First, it is now playable in Aggressive stance, but you get a bonus in Cautious. Second, if you have built up Rage this turn, you’re going to be easier to hit. This is a balancing effect (because the card costs 0 Darkness) as well as being more flavorful.

On a side note – many of the Soldier’s interrupts now allow her to draw a card in Cautious stance. This makes her an even more effective controller in the Darkness cycle.

Now let’s take a look at a card that is basically unchanged from 2.0 to Dawn of Heroes, but the presentation is quite different: 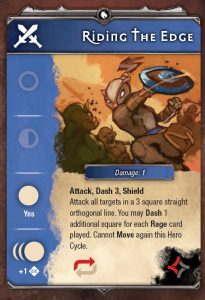 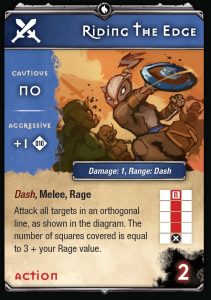 Riding the Edge is an extremely useful card. It attacks multiple targets and it moves the Soldier into the middle of the battle. It’s great as is. However, you will notice that we’ve added a diagram to the new version, which also allows us to adjust the wording slightly. However, the effect is exactly the same. Even the stance restrictions and bonuses are effectively the same. The only other change we made is to eliminate the movement restriction, which is part of our overall adjustment to the action economy.

As I keep saying, one of our design goals is to make each hero feel like they have always felt, but more so. One of the ways we can do this is to move away from cards that feel generic towards ones that are more representative of their hero. The Hunter now has more specific Ammo cards instead of just “Ammo,” the card. Likewise, the Soldier no longer has a card called “Attack”: 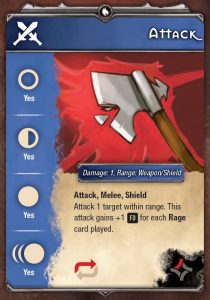 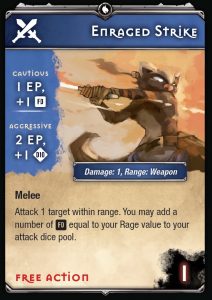 These two cards are basically the same, but the name and the art make the new version feel like it really belongs to the Soldier and not to any other hero. This is her card.