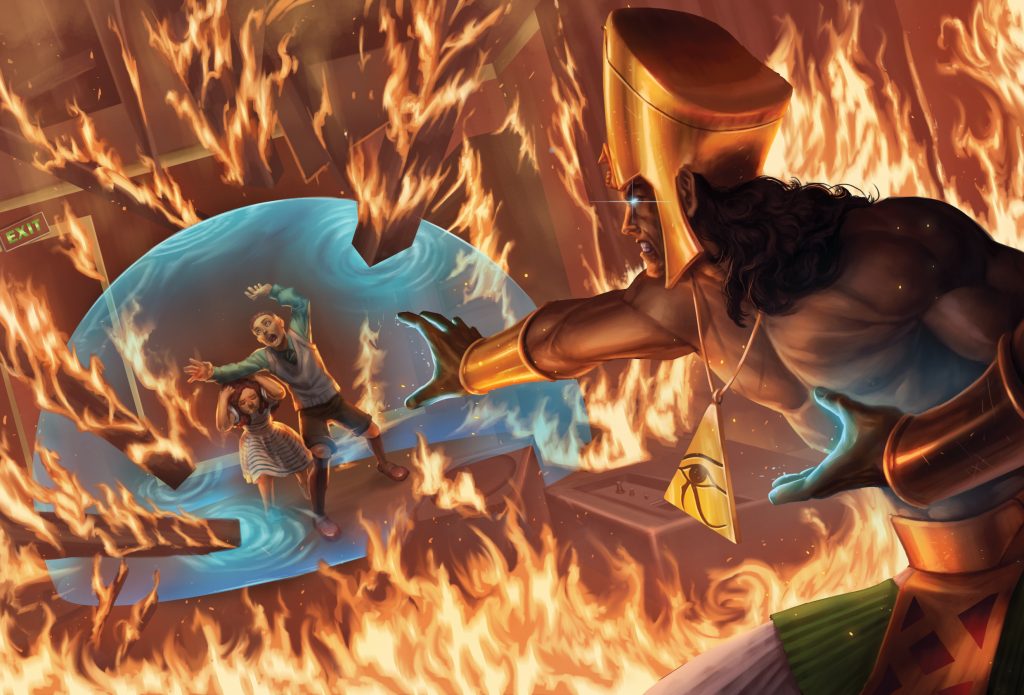 The arcane traditions introduced in the original Nile Empire were thematic but had two main issues: they were difficult to implement smoothly at the table and they played differently than magic did anywhere else in the Original Torg game. The goal in Torg Eternity was to make Mathematics and Engineering interesting and fun to play.

Mathematics and Engineering (and “Egyptian Religion”) relied strongly on astrology which was extremely flavorful, but was time consuming to actually resolve. Each spell required a number of specific planets that you had to configure and each one had different DN and bonuses. Not something that should be the case in a cosm that has the Law of Action. This was an obvious place we needed to streamline, but I didn’t want to throw the baby out with the bathwater, and get rid of astrology entirely. So we added the astrological flavor back in via Perks, like the Astrologer Perk, which modifies and improves the casting of certain divination spells. Additionally, astrology still has a place in the background. Just because we don’t have specific mechanics for every…uh…possibility, the alignment of planets can still be part of the story, associated with major rituals that can do incredible feats.

In addition to not being part of the Aylish magic system involving arcane knowledges, Mathematics had different mechanics for backlash involving rolling on a Backfire chart, so that was something that wasn’t going to be included in Torg Eternity either. More problematic, Mathematics spells really didn’t have much in the way of ‘mathematics’ flavor to them, and in fact, many of the spells seemed better suited for miracles, and so many Mathematics spells became Amaatist miracles instead. In Torg Eternity, Mathematics becomes the ‘divination’ tradition. If you’re wanting to be able have a bunch of spells able to predict the future, this is your jam. Additionally, we played around with mathematic and physical concepts in creating some fun spells for Mathematicians to cast.

Engineering had a different problem in that the spells were much more suited for a background or NPC role, rather than something Storm Knights would have and find useful in their adventures. Engineering became the tradition you go for if you like dealing with traps, finding traps, mapping places, and yes, even building things. Even though we focus on what players would find useful at the table, we do still include some mechanics on imbuing buildings with magic and miracles, and how someone can access them.

Pulp Sorcery came along later in Original Torg, being introduced in the Terra Sourcebook. There, pulp sorcery was strictly based in the pulp powers, and while we did keep that as an element in Torg Eternity, we still wanted actual spellcasting to be a thing pulp sorcerers can do, and maybe even dabbling in a bit of both. Pulp Sorcery ended up being the flavor of magic you could get by taking the Spellcaster Perk as a Nile Empire character in the Torg Eternity Core Book. Initially it was pretty basic, but in the Nile Empire Sourcebook we wanted to make it a bit more flashy and be something a more improvisational player could have fun with. This comes in two ways: illusions and the Supreme Sorcery Perk.

The exact trappings of illusions can tap into a player’s creativity, and the tough part was making it so that the spells could be resolved easily. The Supreme Sorcery Perk requires a fair bit of investment, but once a character has it, he can theoretically (with the expenditure of a Possibility) access any spell he has access to, which allows advanced players an opportunity to play with spells they may otherwise not select. And yes, pulp sorcery certainly is inspired by a certain…supreme sorcerer.

Although magic items do exist in the Nile Empire, we didn’t want to focus on them too much. First, that’s Aysle’s shindig, and we really try to keep certain tropes the domain of certain cosms. The other reason is that magic items are largely covered by mystic artifacts, which are essentially pulp powers. This way, they’re kept unique, and not as commodities like they are in Aysle.

Finally we changed up the original “Egyptian Religion” a bit. First, obviously, we renamed it, finding that calling it by that name seemed generic and odd. We also wanted to connect the faith directly to Doctor Mobius, through his father. Additionally, given that Ancient Egyptian mythology has a lot of different interpretations through history, we were able to play with it a bit, instead making the pantheon and legends a bit darker, in that Osiris isn’t even part of it, having been killed by some of the other more evil Gods and his place usurped by them.

Mechanics-wise, sacred animals are still a thing, and woe comes to those who kill a god’s sacred animal. As mentioned previously, many of the original Mathematics spells became the domain of miracles, but fans will see lots of the original miracles have their own versions here.

Hey, how about a bit of a preview? I realized we haven’t shown any Eternity Shards yet, so here’s one! 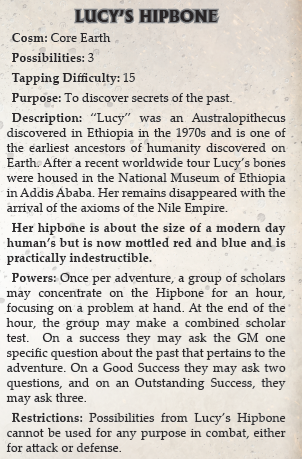 If you want to discuss any of these topics, please feel free to drop into our forums!