First, let me say that I’m not quite ready to get into the nitty-gritty of mechanics and materials updates quite yet. I won’t write about that here, and I also won’t answer questions about it. We’re still doing a lot of playtesting, and many of those details are likely to shift over the coming months. Instead, I would like to present my view of how I’m approaching our new version of Myth in more general terms. That will help frame our discussions of the specifics in later posts.

Before we get into the post please head to the World of Myth Kickstarter, live (until 3/10/20) and fully funded, to support our new vision for Myth if you’re not already a backer. If you are, Thanks! And read on! 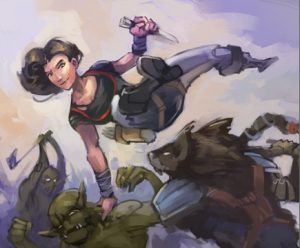 One of the unique qualities of Myth has always been its open-ended play. In many ways, it is more of a storytelling tool than a strictly constrained boardgame experience. Even as more guided modules were released, that feeling remained. However, those modules have been quite popular with fans, because they offer new insights into the exciting world of Myth. Also, adventures offer a perfect way to get new players into the game.

With that in mind, our design focus moving forward is very much on how we tell great stories with this game. Coordinating a team to take down a bunch of Shamblers is great, but when you’re trying to fight through those Shamblers to get to the Avatar of Shadow, that fight takes on much greater significance. That’s the feeling we’re going for, and this provided my key point of guidance:

When we examine what has already been released for Myth, it looks like a pretty complete game. Even if we just consider the base set and the two main expansions, there’s quite a bit of adventure there already. And that’s far from all that was released. The dedicated fans have gotten many hours of enjoyment out of the game as it is, and they are rightly proud of their collections.

At the same time, we do have to treat it like a new game. This is the first time that Ulisses will be releasing a Myth game, and we intend to bring in a lot of new fans. From a retail standpoint, this means that we need to have a new base set, and we then need to release supplements gradually so that stores don’t feel overwhelmed with product. This also means we’re likely to be reprinting miniatures that many of those dedicated fans already have.

There’s no perfect way to resolve this, but by taking direction from that first point, I have come up with an approach that should serve the needs of as many people as possible. 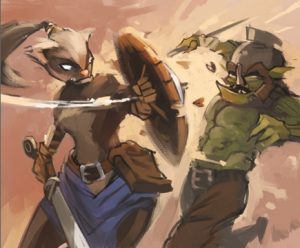 Our new base set is called Myth: Dawn of Heroes. It is not a 3rd edition of Myth, it is a new game. Most of the gameplay will be completely familiar to long-time fans of Myth, even to the extent that many materials will be usable across both versions of the game. However, we are handling this not by updating the existing game but by employing backward compatibility.

This means that we will release new materials that you can purchase separately from the base set and main expansions, and they will work just fine with the 2.0 version of Myth. Specifically:

Because of this cross-compatibility, it will also be relatively easy to incorporate your existing monsters and adventures into the new rules when you are ready to switch over.

The alert reader will notice that the big things missing in this backward compatibility list are the Hero and Darkness cards. While we are keeping the feel and game effects of those cards very close to what they have been, the reworking that we have done to clarify and balance the game makes the Hero and Darkness decks different enough from previous versions that Dawn of Heroes can be considered its own game. It would be difficult to mix those decks in with older materials.

Dawn of Heroes is the future of Myth, but there will always be a place for those who enjoy Classic Myth. Most of all, I’m excited about all the new stories we will tell together. Help us usher in a new era of Myth by backing the World of Myth Kickstarter, live and fully funded now!

14 thoughts on “Designing a New Dawn for Myth”