Hard to get Nile Ninja on that show. They are, after all, masters of disguise. 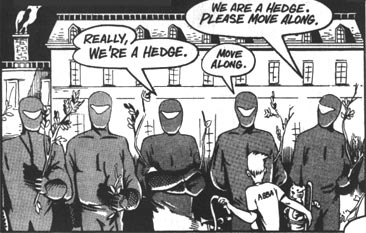 Wakshani wrote:Hard to get Nile Ninja on that show. They are, after all, masters of disguise.

That is so Nile Ninjas.. the original Tick is cool.
Question everything.
Politeness costs nothing.
Top

Yeah, you can pretty much take every single Ninja panel from there and port it over to the Nile without much work. 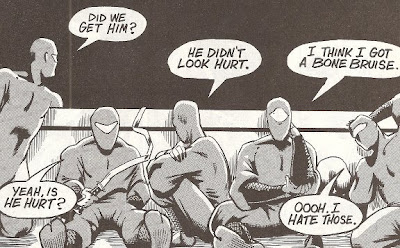 Ooh, so like Battle Bots that would enrage every animal-rights activist out there (not that Tharkold would care).
The Boneyard – Friends and foes within Tharkold's Blasted Land

Unexploded Cow. 'Nuff said.
Dominick Riesland, aka Rabbitball
Co-author, Aysle Sourcebook for Torg Eternity
Creator of the Cosmversal Grimoire
"Those who will not follow are doomed to lead"—Anarchist, Magic: the Gathering
Top

In case anyone is interested, here are the concepts I ran with my group in their infiltration of the Tharkold studio:

The Roommate
Four stages are wibbly wobbly but could end up being this.
A: Read the room to find the weakest roommates. Evidence Analysis DN 10.
B: Don’t appear weak. Appropriate social skill DN 12.
C: Convince the other roommates to vote out the weakest roommate. Persuasion DN 12.
D: Defend against the inevitable physical conflict. Combat or defense skill DN 16.

Complication: Some rumor gets started that puts the Storm Knights as a disadvantage. -1 to future checks.
Possible Setback: Producer decides to extend the episode, causing a repeat of the last step.
Critical Problem: A couple of roommates kill each other. New members are added, forcing a restart, but the timer is not reset.

The haughty elf mage and the cyberpriest got thrown into this one. They both really were good at Intimidation, and they threw that around left and right. The cyberpriest ended up doing hellfire on step D to remove the conflict. This one had some back-and-forth trash talking with characters named Portia, Lance, Brent, and Karen. Of course, since the gods are nonexistent here, the hellfire miracle was obviously psionics to the audience. There was some fame in how he incinerated her, but there may be some fallout since the girl he fried was also a prisoner.

Battle Bears
Team has 30 minutes to install guns into a bear to enter into the competition. DSR with five “rounds.”
A: Soothe the bear enough to approach it. Charisma/Beast Riding DN 10.
B: Anesthetize the bear to perform surgery. First Aid or Medicine DN 8.
C: Stuff guns into the bear without killing it. Medicine DN 14.
D: Train the bear to use its guns. Mind/Beast Riding DN 14.
Person not doing a step may use taunt, trick, or intimidate against the opposing teams. A success acts as combined effort on the next step. DN 9.

Complication: Other team fires upon the Storm Knights. -1 to future checks.
Possible Setback: Something is undone. Go back a step.
Critical Problem: Bear dies! Start back at A with a new bear.

The Orroshan monster hunter with Profession: Taxidermy and the Living Land savage got thrown into this one. Despite the monster hunter's skill, she refused to partake in something so barbaric. This stemmed from a conversation she had with a fellow prisoner who has embraced her lot in life, a Japanese swordswoman named Kumo. Faced with such nihilism, the monster hunter refused to give into the ferocity of Tharkold. As such, the Living Land character had to try all the steps herself. It was a pitiful showing, with the advantage that their bear died quickly without much pain since she at least succeeded in anesthetizing it before sending it into battle. While the monster hunter was mocked on the show, her refusal to go along with Tharkold entertainment will be noticed.
The Boneyard – Friends and foes within Tharkold's Blasted Land

Looking at the numbers, with Tharkold having such a high social, everyone would care!
Question everything.
Politeness costs nothing.
Top

LTTP but this is a fun thought experiment.

Running Man (already mentioned) is naturally the first inspiration that pops into my head. But the topic also made me think of the Marvel comics villain Arcade. He’s an assassin (though not a very good one) who has these elaborate death traps with an amusement park theme, complete with human-like robots and holograms to create realistic environments. One setup was a giant pinball machine that delivered shocks instead of points and bells when the ball (containing the victim) hit something. His creations are deadly but with a wacky twist that would probably make for “good” TV.

There was an episode of the new Dr. Who, Bad Wolf, from the 1st season, that had deadly game show parodies of shows that were popular at the time – The Weakest Link, Big Brother, What Not to Wear. The first two were pretty similar to the real things except getting booted off meant death, and the contestants knew it. The third one I don’t really recall but apparently was a “makeover” show where you had your limbs rearranged or swapped your head onto a different body. For a Tharkold take I think a quiz show would penalize wrong answers by various means of causing pain and/or mutilation instead of instant death. A Big Brother version would maybe encourage the housemates to inflict pain and suffering onto each other.

The current American Ninja show, where people run a timed obstacle course, would be much enlivened by buzzsaws and acid pits.

Someone upthread mentioned the Amazing Race, which I think is an awesome idea for Tharkold. But speaking of actual reality shows, how about Survivor? Except the island (or whatever) is full of dangerous flora and fauna and fun stuff like landmines, and the two teams are actively trying to sabotage/kill each other. It would be more like Lord of the Flies but with a prize for whoever makes it to the end.

A hunting show ala “The Most Dangerous Game.” Some low-ranking Tharkoldu chases down and kills a group of humans, like Predator but filmed and broadcast.

Anyway, that’s all I have for now.
Daddy DM - More Ideas Than Time
TOCG - A Torg Eternity Character Generator
Top

What is that Japanese film where they put school kids on an island with various weapons, everything from saucepans to rocket launchers and only the last person standing gets to leave... and it's all televised I think.
Question everything.
Politeness costs nothing.
Top
Post Reply
29 posts

Users browsing this forum: No registered users and 4 guests