In the upcoming crowdfunding campaign for The Dark Eye, it is up to you to bring the Gods of Aventuria to your table, to finish the fight for the fate of the Bornland in the grand finale of the Theater Knights and to unlock numerous new treasures.

In our next crowdfunding for The Dark Eye, we will finish the publication of the first tier of books. With Gods of Aventuria , the last missing tier–one rule book is released, and with the final three chapters of the Theater Knights campaign, this storyline started in 2016, will come to a grand conclusion. 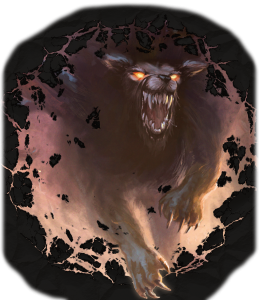 At the beginning of a new time of heroes, stars fall, and sinister cults are on the rise. Now more than ever, the blessings of all Twelve Gods and the help of their children, the demigods, is needed. Even with their blessings and powers on our side there is need for heroes and Blessed Ones to turn the tide. The Nameless One assembles new servants with terrible might and endangers the traditional order of the world.

With Gods of Aventuria, we finish the first tier of rule books, providing rules and backgrounds for all the Twelve Gods. You will see the powers of Ingerimm, the god of fire and craft, Firun the lord of winter and the hunt, Tsa the peaceful goddess of birth and creation, Efferd, the god of wind and sea, Rahja, the goddess of love and passion, as well as Travia, guardian of home and hospitality. You will find Blessed Ones and new liturgies for each of these gods that complement the six established in the Core Rules.

Aside from the Gods, your are introduced to some of the demigods and their Blessed Ones: Aves, the patron of explorers and travelers, Ifirn, Firuns gentle daughter, helper of those lost in the wilderness, Kor the god of mercenaries and war, Nandus, patron of riddles and Swafnir, the thorwalian god of community. 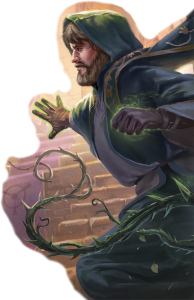 With this book, Blessed Ones get  a similar detail as mages  in Magic of Aventuria. You will find rules for liturgical styles that differentiate Blessed One of the same church from each other, as well as liturgical enhancements for all liturgies to give more flexibility when aiding the works of the Gods. Ceremonial Items for each of the Gods power up your ceremonies and give you  new abilities to choose from. Of course, there are also numerous new liturgies, covering all the Gods and Demigods.

With rules for Zealots, who use visions and sermons, there is a new class of characters that are touched by the Gods without being a fully trained Blessed One.

Not only does the light side grow in power, but the GM gets new, terrifying abilities for the servants of the Nameless Ones. From liturgical chants to hide their dark affliction from scrutiny to ceremonies, summoning powerful servants of the golden one, there are many new options bring new challenges to the table. Giving them their own tradition allows new ways to potray these villans in Aventuria. In addition rebellious Swafnir and quarrelsome Kor might well follow their own agenda. 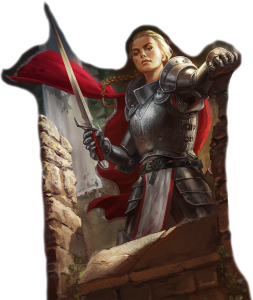 In the Theater Knights campaign, you can see the might of Kor first hand, as his cult rises. Never one to shy away from conflict Kor challenges Rondra as well as the Nameless One. In the final third of the campaign, the struggle for the Bornland‘s future turns from shadowy intrigue and scheming into open warfare. Raise your flag for the Green Platoon and march towards Notmark, the most tyrannical of Bornland‘s fiefdoms, situated at the edge of the world and never before conquered by force. Discover the secrets of the Silver Guard and take the fight to your enemies‘ homes high in the mountains of Iron Edge. As the campaign comes to an end in the Red Choir, the election of a new ruler will shape the Bornland‘s future as hidden players reveal themselves and the fate once more hangs in the balance.

The latter half of the Theater Knights hilights the Gods of Aventuria as Kor takes center stage, and new the powers of the Nameless One will be of great help on both sides of the GM-Screen. In the ensuing conflict, Rondra plays an important part, so her Blessed Ones can make good use of new liturgies, styles, and items they gain. In the Bornland, with its large regions of cold and icy wilderness, the demi-goddess Ifirn becomes an important bornian deity. The information on her tradition and Blessed Ones will enable you to provide an even more lively backdrop to the grand campaign.

So as we are waiting for the crowdfunding to begin, we need you to get the word out. Rally your friends under the banner of the Theater Knights and preach the word of the Gods of Aventuria. Each backer will help to work miracles with this crowdfunding and determine the glory of this next chapter in our journey to Aventuria.

Listen to Tajo Fittkau, The Dark Eye english line developer talk about the Gods of Aventuria on the Ulisses Worlds News show.

3 thoughts on “Gods of Aventuria Crowdfunding”