I Spy with My Imperial Eye

The upcoming Fading Suns Kickstarter (coming March 24th!) includes the big, full-color, brand-new edition core books, chock full of background and game rules. As a gift from the Pancreator, it also includes some additional sourcebooks that give us the skinny on the factions of the Known Worlds: the Imperial Dossiers. 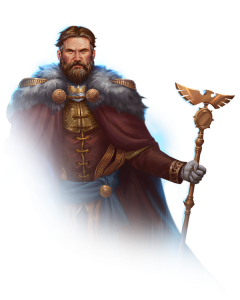 The Emperor has a large administration, and it’s growing bigger year-by-year. From diplomats and bureaucrats, soldiers and star-sailors, and Questing Knights and their Cohorts, a lot of people need to know a lot of things about a lot of other people. Hence, the Emperor has commissioned the production of a series of dossiers to keep his people in the know.

These dossiers — presented to us 21st-Century gamers in the form of game sourcebooks — examine in-depth the main factions of the Fading Suns universe. Each is presented as a primer written by a member of the faction in question. Scholars of the Imperial Eye, the Emperor’s information agency (i.e. spies), serve as editors and have added commentary to correct the primary author’s biased perspective — and to drop telling clues about deeper conspiracies and mysteries. Some of these are classified “eyes only” — secret, “behind-the-throne” information. Since you, as a Fading Suns fan, are special, you’ll get full security clearance to read them.

Just as important as the info on the factions, each book also includes a “factbook” about a topic closely related to the dossier’s faction. These are compiled from multiple sources and edited by the Eye, to prepare Imperial functionaries for dealing with all manner of matters under the rule of the Phoenix Throne. As with the faction primer, these often include classified commentary.

Finally, there’s a rules section for players and gamemasters. These might include new callings, perks, equipment, NPCs, and even alien creatures.

While some of this info was doled out piecemeal in older-edition sourcebooks, we now get to update the timeline and reveal what’s being going on over the last decades of the Pax Alexius, through the lens of a faction member and their Imperial Eye “fact” checkers.

For our inaugural entries in this series, we examine House Hawkwood, the Urth Orthodoxy, and the Reeves Guild. Each of these factions are well-placed to act as patrons for player troupes, as well as to provide interesting player characters themselves. They might not be as sexy as a sword-wielding Decados cyborg, but that Mantis-house noble knows better than to miss a payment on their Reeves loan or attempt to outmaneuver an Orthodox bishop when attempting to annul an ill-considered marriage to a Hawkwood. After reading these dossiers, you’ll want to play a Gray Face Reeve advocate who holds the fate of houses in his hands, or an Orthodox confessor who knows too much about all the right people, or a regal Hawkwood enduring the emperor’s capitulation to the Vuldrok hordes. If nothing else, you’ll know enough to be nervous when such figures encounter your troupes.

In addition to all the juicy background info on these factions, each of these dossiers reveals much about the Known Worlds and how things work: The Hawkwood dossier discusses the customs of the nobility itself, the various ranks, fiefs, and means of advancement, all pertinent to every noble house, whether Royal or minor. The Urth Orthodox dossier reveals the core theology of the Church, applied as an undercurrent to all the sects and orders, even when they disagree about the details. The Reeves Guild dossier tackles the topic of money and the law, both coinage in all its varieties and the laws and punishments that can afflict any Known Worlder, especially those without a Reeve to defend them in court.

Future dossiers will include other factions, from Brother Battle to the Charioteers Guild to, well, all of them eventually.

Calling out Across the Universe

8 thoughts on “I Spy with My Imperial Eye”