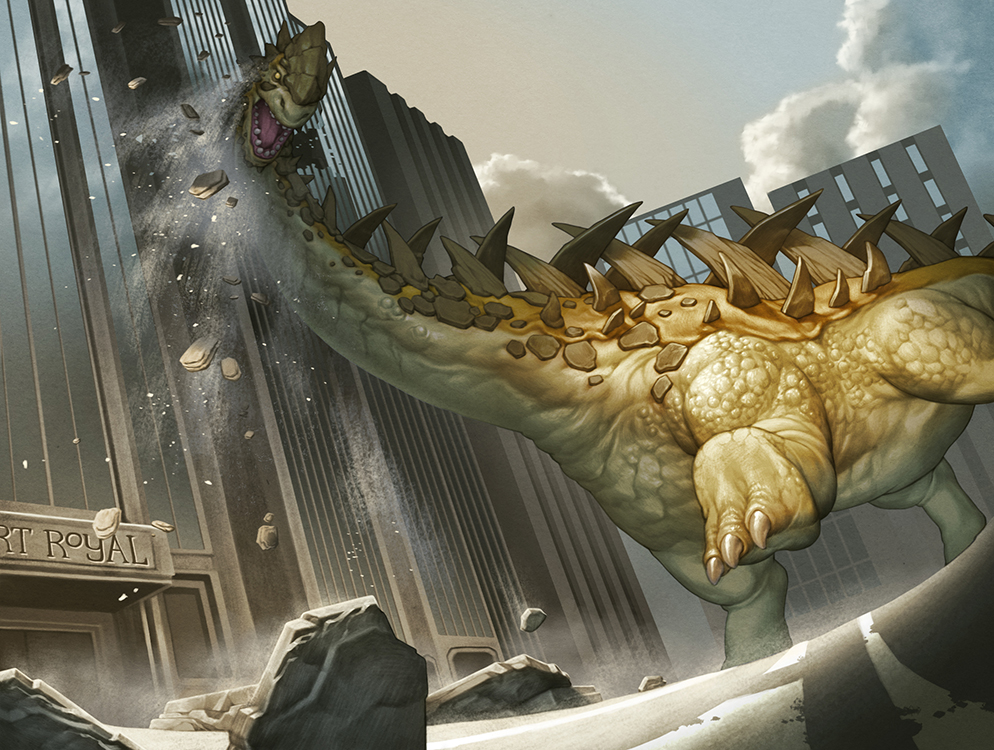 We’re continuing to plug away at the final items before sending the Living Land Sourcebook off to printers and thought you might be interested in some of the details regarding the Explorer and Destroyer Level backer archetypes, as well as those poor cities that have been sacked by Baruk Kaah’s edeinos.

First up, let’s take a look at the destroyed cities.

When the edeinos came for Tallahassee we managed to evacuate everyone into an empty, submerged city that appeared. We called it “New Atlantis.”
—Rayo Rojo

As if stampeding dinosaurs weren’t enough, the ground split open and rivers of lava ran through Vancouver’s streets destroying everything in it’s path. There is no fixing that.
—Bob Dickhoff

[[Editor: Apparently this is the result of a hockey rivalry. Just an FYI, …I’m a poor, snakebit, downtrodden Canucks fan. Just sayin’. 😉 – Deanna]]

We were tracking the epicenter of a quake, and saw it was moving towards Memphis. When we came out of the shelter the only thing visible was clouds of ash.
—Andrew. Moore, UofM

We saw snakes the width of a Smart Car burst out of the Law Quadrangle, slither down State, cross Maynard, and burst into Club Necto.
—Ann Arbor Police pilot Fred Ferguson

First toxic gas started bubbling up from fissures in the street, and then the fires started. Everyone was running and expecting dinosaurs, but they never came.
—Casey Wood, Dallas-Fort Worth Survivor

The Raleigh area was impacted by a small meteorite. The city center lies in ruins, covered by ejecta and subsequent volcanics.
—Dr. Linear

Here’s a summary of the new backer created archetypes that you’ll be able to use in your games:

Next week we begin our previews of the next Kickstarter, featuring the Nile Empire!