Unlike some of the other heroes, we never felt the Brigand was broken or hard to use. But that didn’t stop us from wanting to make the Dawn of Heroes version even better! As with all the heroes, we want this to be a fun hero for new players, but we also want to provide opportunities for experienced players to practice and optimize their strategies.

The Shadows mechanic is an essential part of the Brigand’s style. However, we felt that – like stealth mechanics in many games – it needed a bit of risk. But with that we could also offer the potential for greater reward. Let’s take a look at the new version as it is explained on the Brigand’s Hero Board:

Now, instead of having your attacks cause you to lose Shadows by default, you only lose the token if you roll a natural 1 on any of your d10s during an attack. You can even reduce your risk (but also your potential for success) by rolling fewer dice. Then, you make a skill test at the beginning of the Darkness phase to see if you can hold on to the Shadows token. This replaces the previous Notice mechanic for monsters and is one of the many ways we are prioritizing Fate Dice in our updated design.

This uncertainty raises the stakes for the Brigand, but it also gives him some degree of control. If you need to make sure you hit, go ahead and roll your full dice pool and maybe you’ll still get to keep the token. If you’re likely to hit, maybe you’d rather play it safe. That choice gives the Brigand more tactical options. 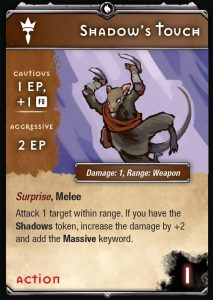 There’s something new in the Brigand’s toolbox!Previous versions of this hero used the Combo keyword to allow him to play multiple attacks chained together and only resolve the cost at the end. This was fine, but it restricted the effectiveness a bit unless you could chain several cards together. With the new Surprise mechanic, we can provide a similar effect but make it useful even if you only play one card (because it might only take one card to bring the Darkness meter to 6). 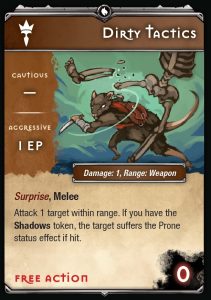 The ability to avoid triggering the Darkness is quite strong, and it offers great strategic options for the whole party in terms of ordering play. Whereas Combo mechanics allowed the Brigand to play several cards before the Darkness had a chance to go, Surprise mechanics actually allow one additional (non-Surprise) card to be played before activating the Darkness cycle, and that card could belong to ANY hero. The party could even decide to have the Brigand act last with a series of Surprise actions, then let the Refresh phase happen so everyone has a new hand of cards before the Darkness goes.

Another thing you may notice about these card samples is that we are trying to remove some of the stricter Shadows requirements of previous editions and instead make them bonuses, both in terms of the card effect and enabling the Surprise mechanic. Most cards can now be played outside of Shadows, but some are simply less effective. This helps the Brigand with his card flow while still encouraging the use of Shadows.

3 thoughts on “Myth Dawn of Heroes Design Spotlight – the Brigand”