Just as we did with The Dark Eye, we’re offering a number of products free or Pay What You Want on DriveThruRPG. These include: 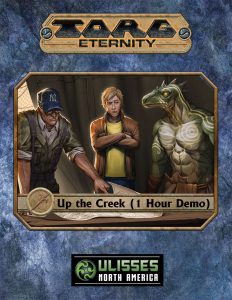 Up the Creek Quickstart

This Quickstart is intended as a one hour introduction to the concepts and rules of Torg Eternity. It’s designed to walk both the GM and the players through the rules together, adding layers as it goes. This gives a general feel for gameplay, but there are many more character options and realms to explore in the full game!

INTRODUCTION
Location: Briefing room aboard the USS Theodore
Roosevelt.
“Three months ago the world as we knew it changed. Strange bridges descended from the sky in various places around the planet, and where they landed reality itself bent and changed. Invaders crossed the bridges and now they’re turning Earth into something else, piece by piece. The clash of realities creates storms, and a few special people are changed by the storm. They become heroes, the best version of themselves from this or an alternate reality. You and those seated in this room are some of those people.” 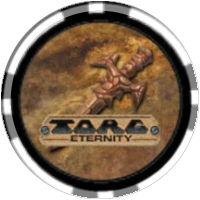 For Possibility Tokens you can use poker chips, coins, dice, plastic gems, whatever you have available. 20 tokens should be enough. If you’re playing virtually you’ll need a token. Here you go! 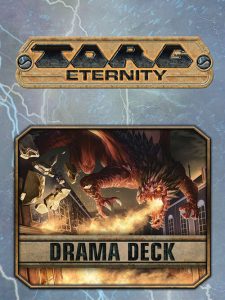 Unlock the drama and embrace your destiny with these special decks for use with Torg Eternity. Drama cards control the initiative and pacing of the game, and trigger pecial events during encounters, chases, or important tasksDestiny cards allow the heroe to to bend reality and perform extraordinary feats! Cosm cards reinforce the World Law of a realm and provide an opportunity for rewards… and danger! 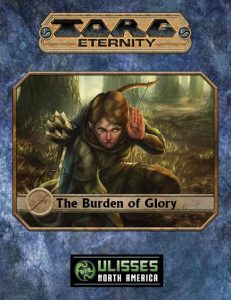 The Possibility Wars have raged for almost a year. The Storm Knights are already a team that’s been working together for weeks. They are stationed in Lincoln University, a hardpoint inside the Living Land. In fact, it’s one of the last remaining hardpoints in Missouri. Edeinos raids overwhelmed and destroyed the others. The team’s mission here was two-fold: defend the Core Earth foothold in the zone against edeinos raiders, and scout the surrounding area for Wonders. Lincoln University’s campus is heavily fortified.

This is an adventure created for GenCon 2017 and run at special events. It offers the Storm Knights a choice between saving the inhabitants of a hardpoint, uprooting a stela, and making a key discovery about a potential ninth cosm. Based on the results of those adventures the default map changed and the guilt of the elves was revealed—what will happen in your world? 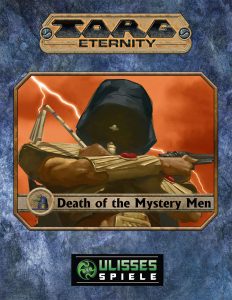 This is a special adventure created for GenCon 2018. It determines the fate of the Mystery Men, whether they remain a factor within the Nile Empire after the death of Dr. Frest or they are eliminated to make way for new heroes. It also offers the first look at an alliance between High Lords. This is a Beta Clearance adventure, and the appropriately leveled Mystery Men themselves are included so you can play as the survivors looking for the rest of their team. At the end of the adventure there’s a survey so the GM can record the choices players made, and those choices will be referenced in the game line going forward!

It’s near the end of the first year of the Possibility War. Dr. Frest is gone, and Dr. Mobius has started targeting the rest of the Mystery Men to eliminate them one by one. He’s found a pocket reality and learned more about his own origin and how it relates to The Egypt That Never Was—but more than that it’s a reality without the Law of Inevitable Return.

He’s caught several Mystery Men and entombed them in this dangerous place, and carefully set a trap to lead the rest—or some equally powerful and troublesome heroes into the same doom. And he’s brought in a powerful ally to make certain things go his way this time! 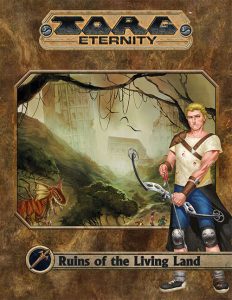 SECRETS WITHIN THE RUBBLE!
Ruins of the Living Land offers a deeper look into the crumbling cities inside Baruk Kaah‘s savage realm. Pockets of human refugees survive around hardpoints or adapt to the new world. New enemies lurk in the lush urban jungle, and powerful Eternity Shards are waiting for Storm Knights bold enough to find them.

Explore the remnants of the old world seeking danger, treasure, or the strange societies forming within! 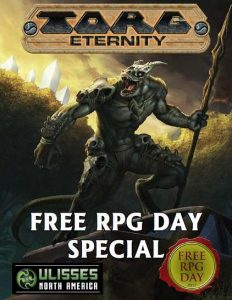 They came from other cosms—other realities—conquerors joined together to steal the Earth’s living energy…to consume its possibilities. The Possibility Raiders brought with them their own realities, turning portions of our planet into someplace else.

In addition to official products there are a bunch of fan-made products on the Infiniverse Exchange for Pay What you Want!

This video by GM Matt shows how to export the Drama Deck PDF to images for use in Fantasy Grounds or Roll20. It also continues with more details on how to setup the game for Roll20.

There is a fanmade extension for Torg Eternity on the Fantasy Grounds Forums. You will need to export your cards from the Drama Deck PDF to 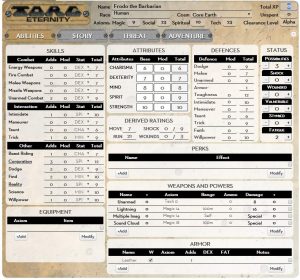 Roll20 has a couple of resource for you to play virtually, the first is a fanmade community character sheet, which you can find on the Roll20 Wiki.

You can find the Drama Deck ready to go on the Roll20 Marketplace.

Check back next week as we’ll have more goodies for you, after you play through the Up the Creek Quickstart and the other free adventures.

8 thoughts on “Stay at Home and Play Torg Eternity”