Tharkold is a realm in civil war. After Jezrael assassinated the High Lord of Tharkold, Kranod, she thought that she would take his place. However, Malghest, the Darkness Device had other plans. Instead of accepting Jezrael as the new High Lord, it wanted to test her mettle against two other possibilities: Duke Thratchen and Volkov, Duke and President of Russia. The challenge was to expand the realm: whoever managed to do so, with the greatest potential for Possibility Energy, would claim their rightful place as the Master of Tharkold. 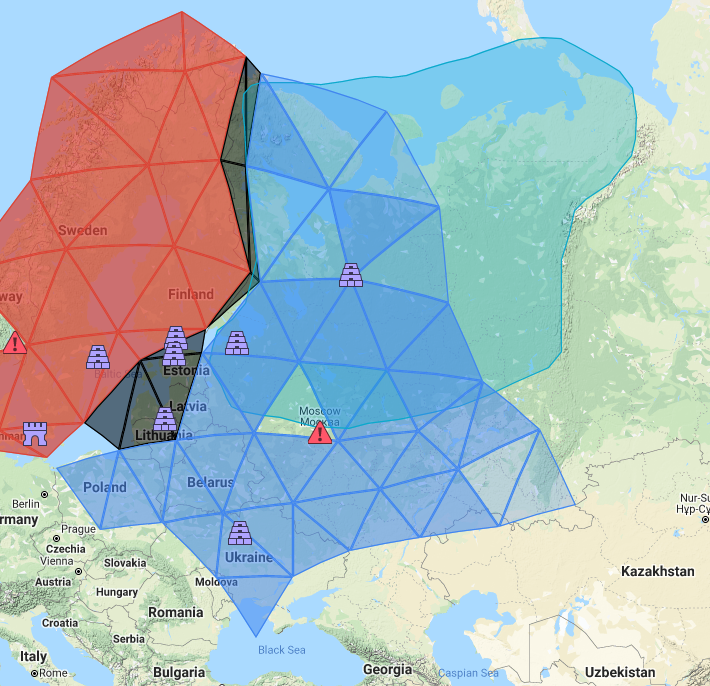 Tharkold is a cosm with a degrading Magic Axiom, and is teetering on no longer being able to support the existence of demons at all. Dropping to Magic 11 would doom all of the Ord technodemons, and even reality-rated demons would eventually fall. This decline is a result of the technodemon’s own actions.  They were brought to Tharkold by summoning spells, and remained sensitive to it…but also viewed its use as a threat. Any use of magic by the Race had to be stamped out. At Magic 12, conjuration is no longer possible, though the Demon Magic tradition does contain knowledge of such spells. Occultech also requires Magic 12 to operate, but although permanent magic items are not possible at that axiom, the high Tech Axiom combines with Magic and powers these cybernetic implants.

Occultech requires Tech 25, and many other technological advancements still are supported. However, just because the realm allows the existence of technology, some of it is very rare. Technology for leisure, comfort, or convenience is rare at best, non-existent at worst.

Tharkold once had gods, thousands of years ago, but they became powerless as the demons won the war to enslave the Race. Tharkolds hold no spiritual beliefs, and although the Race still believes in souls and reincarnation (called Liberation), spiritual power is practically non-existent.

Finally, Tharkold has the highest Social Axiom out of all the invading realms, but only is able to achieve a slight part of the potential that it holds. As the Magic Axiom fell, the Social Axiom rose. Not only did this reduce the ability of the Tharkoldu to fight the Race, it allowed the Race to develop powers to enhance their ability to revolt: psionics. Although the social cohesion of the Race is affected by the Tharkold World Laws, the increasing Social Axiom is improving those aspects of Race society as well.  Technodemons gained little benefit from the high Social Axiom. No technodemon has developed psionic powers on their own (although there is some Occultech that can allow it). They don’t understand psionics, and only now realize how much of a danger that power has put them in.

Tharkold’s Law of Domination, Law of Pain, and Law of Ferocity are detailed in the Torg Eternity Corebook. However, just like the other realities, Tharkold has some minor World Laws as well.

Law of Conservation of Evil:

Evil exists in a measureable form. Deeds and ideas that promote harm and suffering create evil, but the only way that evil diminishes is through redemption and forgiveness, both of which are in short supply in Tharkold.  However, the recent invasion of another cosm and now Core Earth has resulted in a dilution of evil in the home cosm. Demons are doing their evil deeds on other worlds, and being destroyed there. Although the invaded cosm becomes a bit darker, Tharkold’s evil is reduced by a similar amount. This has resulted in the creation of Aspirants–technodemons who have chosen to fight their inherent evil side!

Murphy’s Law made a World Law…things don’t go smooth. This also makes the citizenry apathetic to changing their situation…whether they’re victimized by gangs, or leaders, or technodemons…it doesn’t really matter.  Some Russians like to say this World Law has been in effect since before the invasion.  Additionally, tales of Glory spread slower in Tharkold, though the UN has declared that no stelae can be uprooted in Russia until Volkov’s situation is resolved.

Although the Spirit Axiom is too low to allow spirits and ghosts to manifest, spirits manifest directly as a result of this World Law. The wastes of the Blasted Land, especially the empty cites where thousands or millions died, are spooky. Walls only seem to fall over when there is someone is resting beneath them.

Over the next several weeks we’ll be highlighting different parts of the upcoming products for Tharkold including psionics, Occultech, spells, and details on the Race and the Aspirants. If you have any questions or would like to discuss this preview, ask in the comments below!