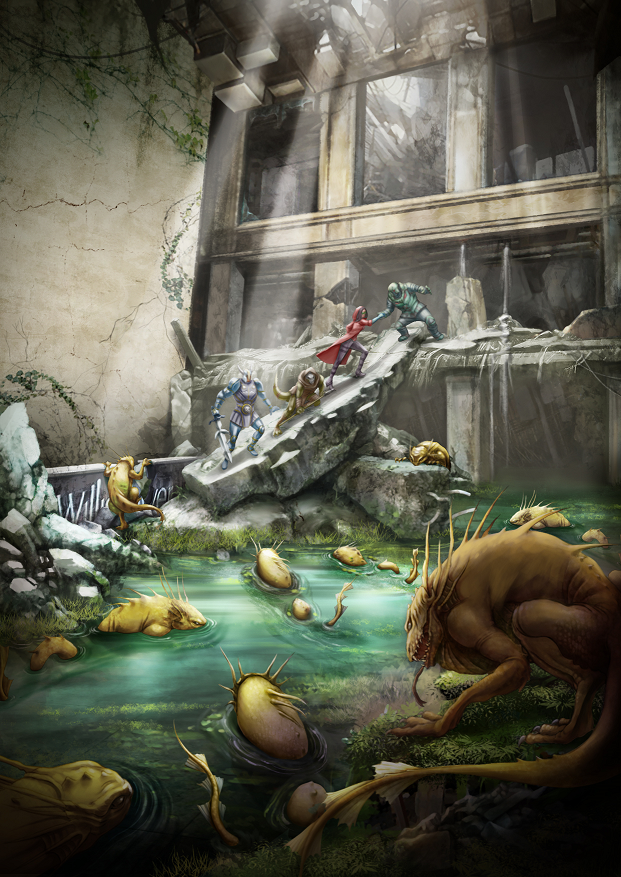 This key ingredient first appeared in The Land Below, by the ingenious Stewart and Stephan Wieck. Originally the Land Below was its own cosm but heavily connected to both the Living Land and the Nile Empire. With the updated World Laws it made sense to bring the Land Below completely inside the Living Land, and sever its connections to the Nile Empire. I love the Nile Empire, but we didn’t need it here, that pulp flavor inspired by Edgar Rice Burroughs and Pellucidar now infuses the entire realm. Mobius’ shocktroopers Empire might eventually find their way there through the vast, interconnected underground tunnels that now cover Core Earth, but we don’t need them there to start with.

Shane wanted to do our first major adventure release to set some precedents for what would follow. The goals he set for The God Box are what we look to do with each cosm’s adventure book: It needs to be big, it needs to cover different parts of the realm, and it needs to reinforce what that cosm is all about. The God Box is about a plot to capture Lanala herself. The stakes are high, and the adventure takes the Storm Knights to several different regions of the realm to show the variety that exists: from the embattled ruins of Washington, Wonders that are actually horrors, the temples of Chichen Itza…and of course the Land Below itself.

In addition to the adventure, the book contains extra information about the region and tribes of Merritika, additional creatures, and notes on the religions and miracles for players who wish to worship Darok, Karruk, Raya, or even the great wasp of the Darooni! These extras are meant to help add some depth if cosm Card play leads to unexpected situations, or for continuing adventures based around the Land Below itself. The goal was to give the GM extra background and material for when the players do something unexpected, and that adds value to the book overall.

Updating Merritika’s inhabitants was fun. They are a rough lot, including wasp-riding cannibals, volcano-worshiping slavers, and foul cultists mutating into serpents. The focus on what to include and what to tweak came down to their role in a game session. What does this group do within the adventure, what makes them different from other groups we could spend time on instead? Most importantly, how do we think Storm Knights can interact with them beyond combat?

Almost all of the factions in Merritika are potential allies. They’re different flavors of savagery, and it’s up to the players to determine what they can accept as just a different culture and what they need to run from at top speed. And of course, a few like the Serpentors, don’t leave any room from negotiation or alliance–they’re pure threat.

Finally, there’s Malacryx, the villain for the adventure. She’s representative of what we want to do with all the cosm adventures for the first year of the Possibility War. It’s too early for the Alpha or Beta Clearance Storm Knights embarking on these adventures to directly face off against the High Lords themselves. So, for these stories we need interesting villains, powerful but not quite on the level of the High Lords or their top lieutenants. These foes give the Storm Knights someone important to square off against–someone they can eventually defeat and then move on to the lieutenants, and finally the High Lords themselves. 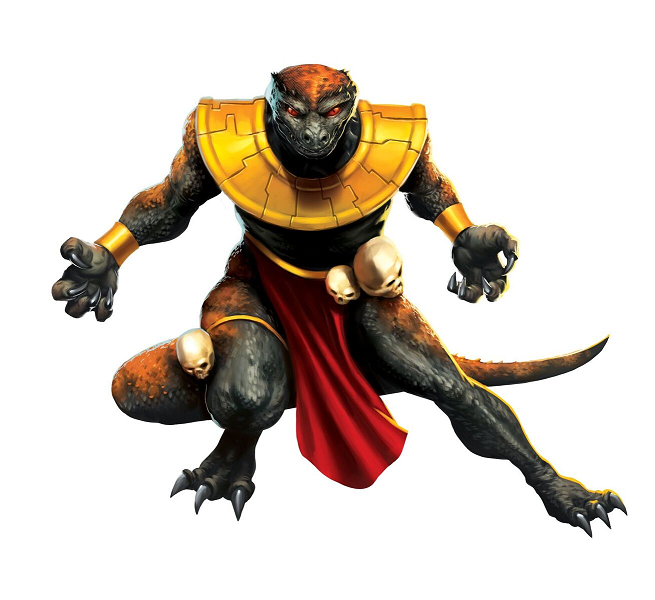 Villains like Malacryx aren’t disposable, however. They’re ambitious and ruthless, looking to gain power themselves and move up the ranks. Depending on how the adventures play out these foes might supplant the High Lord’s aides or even the High Lords themselves. That’s the fun part of the Infiniverse for us as designers. We have an idea how things could work out, but the surveys that come out for each adventure can totally change things and push the war in new and unexpected directions.