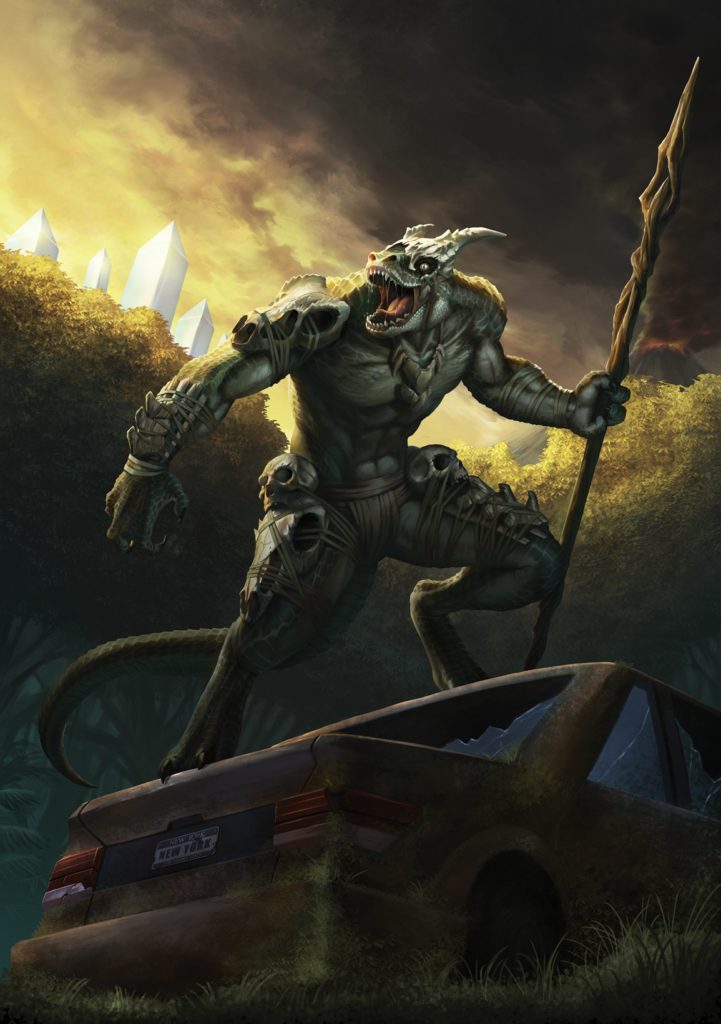 There was some debate about whether we should do statistics for Baruk Kaah and the other High Lords, but in the end we decided it was an absolute must for a couple of reasons.

One, we mention several times that Baruk Kaah is a “hands on” kind of High Lord. He’ll show up if Storm Knights are being particularly pesky to reign things in, and the heroes are going to need to beat a hasty retreat. That’s not very interesting if we just have the GM narrate it. You have to feel the power of the Saar for yourself, and that just doesn’t work without stats.

The second big factor is eventually you’re going to have to face Kaah and win. He seems impossibly tough for a starting Storm Knight (and he should be!) but if you’ve been playing for a while and have 500 xp you might actually have a chance. You’ll need good card play, teamwork, and tactics, but it’s doable. And we wanted that kind of progression to exist. The satisfaction of meeting a foe who’s beyond you at first, but eventually you’ll be on the same level and ready for a showdown. We want that endgame to be something players can see and look forward to.

We knew we had to do it, so then the question became exactly how to stat him so he wouldn’t just get killed…but he could also beatable. Even a starting Storm Knight could get super lucky: a glorious shot with exploding damage and then the Saar gets a 1 on his Soak test and he’s down. But he’s not alone, and Rec Pakken can rescue him. To really finish business with Baruk Kaah he needs to be separated from his Darkness Device first. No easy task, but opportunities may emerge as the war moves forward.

Offensively he’s a brute. He has to be, because by definition he’s the strongest edeinos in the realm. Kaah is a whirlwind of terror and is going to wreck anything in his path, whether it’s tanks or Storm Knights. He will hit, and he will do tons of damage. Storm Knights can Soak those hits, which means they can hold out for multiple rounds, perhaps enough time for the situation to change and draw Kaah’s attention elsewhere. This is also a great time for a Martyr card. A face to face meeting with the High Lord is a dire enough event that suddenly that option seems dramatically appropriate and worthwhile.

The real challenge here wasn’t just to make him tough, but to make him interesting. He’s got his own attack style but also a few weaknesses. A team that can switch between strong taunts and tricks can keep him off balance. Have everyone spread out to keep him from crushing the whole group with one swing. If you can last long enough to get a full Action Pool the tide may even turn! Get him Vulnerable and stack on the cards to get a few clean shots in. Once he’s taken some Wounds he may suddenly remember there’s an important attack somewhere else he should really go check on!

He’s a counterbalance. Most Storm Knights probably won’t meet him for years. An arrogant group that thinks there’s nothing in the Living Land to stop them from uprooting any stelae they please could earn the Saar’s undivided attention much earlier. Sometimes a group needs to know why they can’t just roll up to the maelstrom bridge and put an end to things once and for all.

So keep your heads down, Storm Knights, have an escape plan, and keep training for the day the Delphi Council needs you to step up and face this monster once and for all!