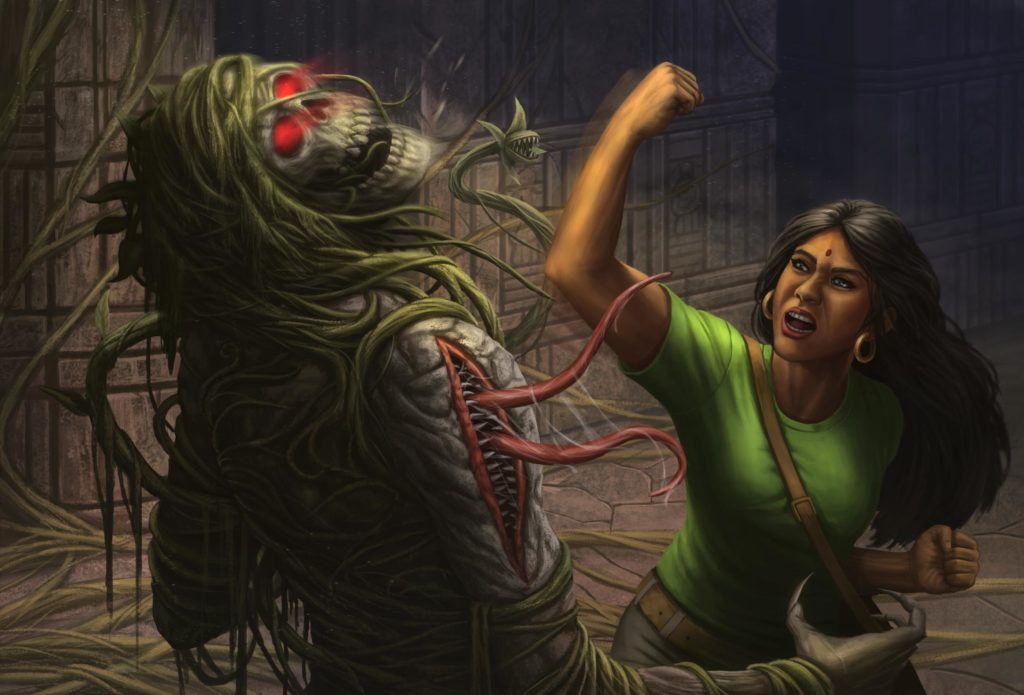 This week we get into the basics of combat in Torg Eternity.

As mentioned in our previous preview, each round the GM flips over the top card on the Drama Deck. The card indicates which side goes first in the round, and whether there are any advantages or disadvantages for each side. Standard Scenes tend to see the heroes get initiative or have the advantage (or the villains get a disadvantage) while Dramatic Scenes have the opposite bias.

Characters on each side can take their turn in whatever order they wish. On their turn, a character can move up to their Dexterity in meters, or run up to Dexterity x 8 meters (but takes a -2 penalty on any actions).

A character can take multiple actions on their turn, but every action gets a -2 penalty per action taken (so three actions would all have a -6 penalty).

After taking an action, even if unsuccessful, the player can then play a Destiny card from their hand into their Action Pool.

The four kinds of interaction attacks are maneuver, trick, taunt, and intimidation, all of which use the corresponding skill and target the opponent’s skill. Fans of Original Torg will note the absence of test of wills, which is no longer in the game.

An Outstanding Success additionally provides a “player’s call” which is negotiated with the GM to have a character surrender, fall off a building, or simply miss their next turn.

These attacks are vital to even the odds against opponents that are significantly stronger or faster than the heroes are, and provide a weakness to be exploited on the villain’s side. A player choosing to leave his Charisma at 5 is opening himself up to an easy taunt and becoming Stymied, Vulnerable, or worse!

Most of the time though, the villain just needs to get beat down. Physical attacks are attempted using an attack skill against the appropriate defense skill. Ranged attacks (fire combat, missile weapons, heavy weapons, energy weapons) target the opponent’s dodge, while close combat attacks use unarmed combat or melee weapons against the target’s unarmed combat (if they don’t have an appropriate melee weapon) or melee weapons (if they do). Some other skills such as those used for magic, miracles, or psionics can be used as well, and sometimes willpower is used to defend against mental attacks.

A target can make an Active Defense as his action, which allows him to roll a bonus to all of his defenses until his next turn (with a minimum of +1).

Attacks at medium and long range have penalties (and there is no longer a minimum +1 bonus for firing at ‘point blank range’). Attacks against large targets get a bonus to hit.

If the attack hits, the target (usually) takes damage. On a Good hit, the damage is increased by +1dE, or +2dE on an Outstanding hit. As mentioned previously, any rolls of E count as +5 and then the die is rolled again and added to the total.

The damage is then compared to the target’s Toughness, even if the attack is considered ‘mental’ or ‘spiritual’. The damage table is simplified from Original Torg: 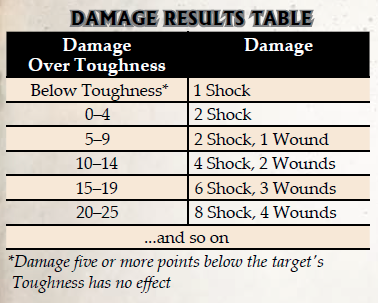 First, there is no differentiation between Ords and reality-rated characters. Ks and Os are no longer damage types, but instead are a condition: ‘KOed’. Finally, unless the attack is significantly weaker than the target’s Toughness, at least 1 Shock will be inflicted on a hit.

When a character reaches her Shock limit (based on Spirit), she’s KOed. Any additional Shock is ignored.

A Death and Defeat test is a Spirit or Strength test (whichever is less, though that can be mitigated by Perks). On a failure, the character dies (but can make one last dramatic action). On a Standard Success, the character suffers an Injury: a permanent reduction in one attribute. A Good Success makes that Injury temporary, and an Outstanding Success merely KOs the character.

There’s a lot more to come next week with regards to combat, including combat options, vehicles and foes, but if you have any questions about the basics, head on over to our forums!