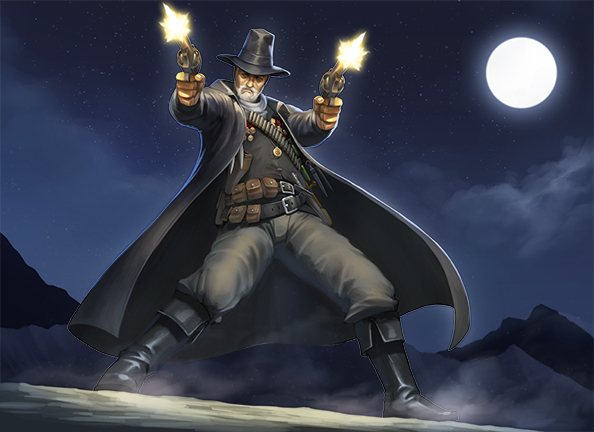 One of the goals we had with the new design was to try to make each attribute important. Torg Eternity characters have five attributes:

In addition to humans, edeinos from the Living Land, and dwarves and elves from Aysle are options in the Torg Eternity Corebook. They have different attribute limits, but also come with drawbacks. For example, elves still have their affinity for magic, and if they’re in an area with a Magic Axiom of less than 12, their Shock limit is two less than normal.

The skill list has been significantly pared back from the original Torg rules. Many of those other skills have been converted into Perks. Although skills have a default attribute they’re based off of, they’re not limited to that. For example, identifying a particular vehicle is Mind + land vehicles.

Perks represent your character’s special abilities or qualities. Characters start with two Perks, and can gain more as they advance. Many Perks have prerequisites including an attribute of 10+, belonging to a particular race, or coming from a certain cosm.

Many Perks are supported by a cosm’s World Laws, such as the Honor abilities from Aysle’s Law of Honor and Corruption, or pulp powers from the Nile Empire’s Law of Heroism. These Perks are the main way that a Storm Knight can utilize her cosm’s World Laws in other realities (albeit by creating a contradiction).

Here’s an excerpt from a Perk Storm Knights from Orrorsh can select: Medals. 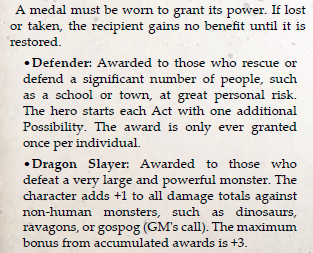 The big change when it comes to advancing your character is that it no longer requires Possibilities. Instead, characters gain XP to spend on increasing their attributes, skills, and purchasing additional Perks.

Attributes are a bit cheaper to increase now as well.

Naturally, your Storm Knights will use plenty of weapons, armor, and other pieces of tech to take on the High Lords. Getting gear is a bit different than the original Torg, largely through the use of persuasion and streetwise skills. You can still keep track of money, but it’s not the default assumption.

The span of weapon damage has been compressed. Damage values greater than 20 are the realm of heavy weapons. However, there is no more ‘max damage’ rating for melee weapons.

Armor also has a more compressed range of values. The maximum armor value is +5 to your Toughness, though again, there is no ‘max Toughness’ rating. The major change with armor is that each has a Max Dex rating, which is the maximum a character’s Dexterity can be while wearing the armor. Ninja have incentives not to wear heavy armor now.